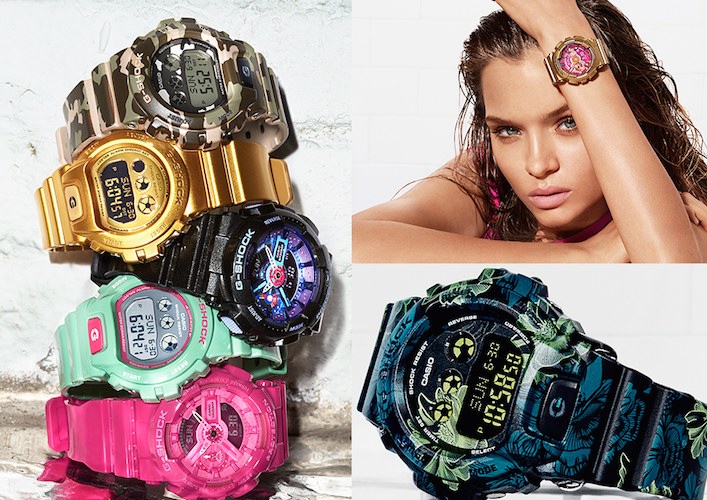 As some of you may remember, last year Casio G-Shock launched the S Series, a collection for women. Prior to that G-Shock was unisex, and Baby-G was the solo women’s line.  This season, Casio has taken the young and rugged nature of the G-SHOCK brand and sassed up the S Series by partnering with Victoria Secret angel Josephine Skriver to debut the newest summer launches. Utilizing their 30 plus years of expertise in structural durability and technical functionality, the G-Shock S Series was designed to create a fashion accessory piece for the modern day woman who embraces life and its challenges.

END_OF_DOCUMENT_TOKEN_TO_BE_REPLACED 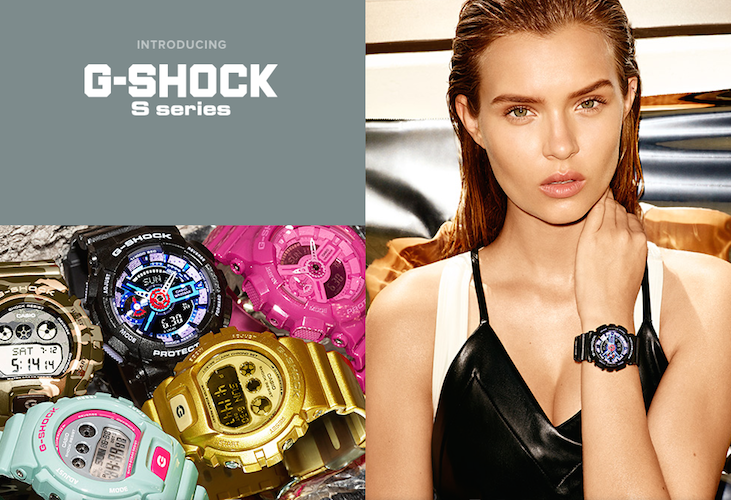 “This is the first time in the brand’s 30-year history that a series of models have been designed specifically for female consumers”, said David Johnson, Vice President Timepiece Division Casio North America. “The size, color and design are geared towards a fashion forward female that is looking for an accessory to compliment her modern and active lifestyle. This collection gives us a new look and new consumer to build upon in the future.”

END_OF_DOCUMENT_TOKEN_TO_BE_REPLACED 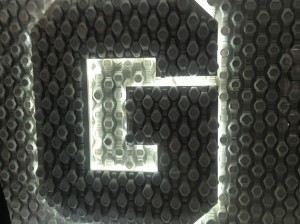 Last night, Casio G-SHOCK, the watch brand, known for their waterproof, digital mens styles and partnerships celebrated the launch of their first flagship store in NYC’s SoHo. Spanning over two narrow floors, the first is the retail space that carries all of the new styles, while the upstairs pays tribute to their heritage by displaying a timeline of the timepieces released over the brands 30 year history, as well as

END_OF_DOCUMENT_TOKEN_TO_BE_REPLACED

I recently peaked into the world Casio G-Shock as the brand celebrated it’s 30th anniversary kick-off event at the Manhattan Center.  Casio has a lot to celebrate in the upcoming months, with innovative and impressive watches being launched throughout the year – several in collaboration with professional athletes and artists (any Eminem fans out there?).

The press conference started with a history of the G-Shock brand, included a demonstration of G-Shock’s toughness by being launched against a metal wall, and concluded with an exciting roster of watches that the world can expect to see coming soon. “Absolute toughness” was what the engineers of Casio set out to achieve, and they certainly did not fail at creating an indestructible watch and indestructible brand. Features like

END_OF_DOCUMENT_TOKEN_TO_BE_REPLACED

After announcing their partnership with actor and musician Bryan Greenberg (star of HBO’s “How To Make It In America”) at a recent press conference, Casio celebrated the official launch of their new men’s watch line, Edifice Black Label.

Hosted at the Tourneau TimeMachine store in NYC, I caught up with Bryan Greenberg for a chat about his latest endeavor. Our conversation went

END_OF_DOCUMENT_TOKEN_TO_BE_REPLACED

Monday (20th) – I attended the Swarovski Elements ‘22 Ways to Say Black’ charity auction. Hosted at Phillips de Pury, I registered for a paddle and partook in the auction, although I came home empty handed.  The event raised over $100,000 to benefit breast cancer research. Guests in attendance included Halle Berry, Julianna Margulies, and Sofia Vergara.

Tuesday (21st) – The first day of the Fashion Coterie Sole Commerce show at Jacob Javitt center! I spent the day at the Chocolat Blu booth lusting over these shoes! I have to wait til Spring 2011 to add them to my collection. That should give me enough time to decide which color I want.

That evening I took my first Pole Dancing class (Intro to Pole Dancing, taught by Bonnie Fischer) at NY Pole. I’m not one for working out (I try, I just get bored), and I’m incredibly shy, so walking into the small studio, I was a little nervous. However, my friend and I had a blast! It was so fun, and we both felt so comfortable that it wasn’t scary at all. It was such a great workout and the time flew by. I even learned a thing or two;)

Wednesday (22nd) – I was a bad girl and joined my cousin at the Hermes sample sale.  Meet my new friend (above). Love my scarf, but I’m officially cut off.

That evening the lovely Erika (from Shoes, Shirts, and Other Sh!t) and I attended the Baby-G & Hellz Collaboration Release Party featuring DJ Elle at 1Oak. Creating two signature watches, L.A. based designer Hellz and Casio Baby-G watches featured 80’s pop fashion homage to the NYC streets. What do you think of them? Better than the poor excuse of a drink 1Oak served up? Agreed. What can I say 1Oak if you’re not offering an open bar and are going to charge $18 a drink, put some alcohol in it.

Thursday (23rd) – Back to the Coterie show, this time to hang out with former Project Runway contestant, Daniel Feld and model his new line, Kymerah. I WANT IT ALL! I will post more about the line shortly.

After the show, I headed to