I recently peaked into the world Casio G-Shock as the brand celebrated it’s 30th anniversary kick-off event at the Manhattan Center.  Casio has a lot to celebrate in the upcoming months, with innovative and impressive watches being launched throughout the year – several in collaboration with professional athletes and artists (any Eminem fans out there?).

The press conference started with a history of the G-Shock brand, included a demonstration of G-Shock’s toughness by being launched against a metal wall, and concluded with an exciting roster of watches that the world can expect to see coming soon. “Absolute toughness” was what the engineers of Casio set out to achieve, and they certainly did not fail at creating an indestructible watch and indestructible brand. Features like the use of solar power and bluetooth are common for these highly engineered pieces of technology and we can expect to see many new releases with these features. Here are some of my favorite designs and collaborations to look out for:

1. GA110MH-7A – A collaboration between G-Shock and the UK-based streetwear brand, Maharishi, this limited edition black-and-white watch design was inspired by the German battleships during World Wwar I. 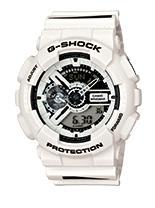 2. DW6900 Metallic Dial series – Fans can see a revamped version of the ever-popular classic look with this series of watches. The series will have colorful metallic dials, color-mirrored LCD displays and high gloss finishes.

3. GA110 and GA200 series – Who says technology can’t be fashionable? With the beautiful addition of one of the season’s hottest colors, this rose gold adorned series of watches turns a useful gadget into an even better accessory. Don’t let the pretty looks fool you, though. These watches still preform as a G-Shock should, and include shock and 200M water resistence,  magnetic resistance, Auto LED, flash alert, world time, several alarms and one snooze, and more.

4. Collaboration with graphic designer, Eric Haze – Out of the many collaborations that G-Shock has had over the years, the product of the relationship between G-Shock and Eric Haze is my favorite. He also happens to be the brains behind the 30th Anniversary logo. 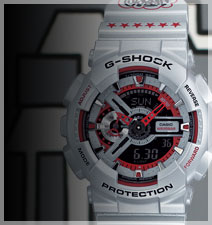 As if the press conference wasn’t exciting enough, the night ended with performances by DJ Drama, Slaughterhouse, and the one and only Eminem. 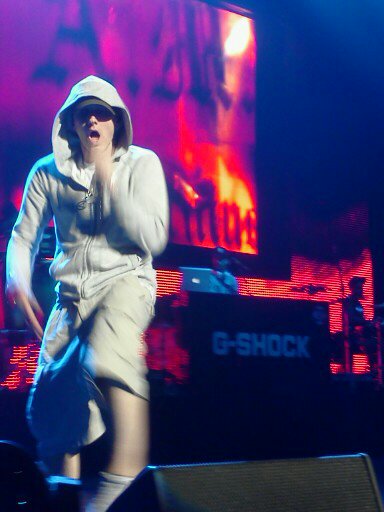 {Highlight of the night? Front row at the concert! I died a little…}

I could not have had a better time! Thanks for the amazing night, G-Shock! To learn more about the brand and the technology, visit www.gshock.com.