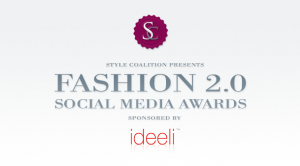 Last night the Style Coalition Fashion 2.0 Awards brought together the top social media influencers to recognize and honor the most innovative fashion brands in the online community. Attendees gathered at the SVA Theatre in New York City to announce the winners and celebrate the new fashion frontier. Hosted by Robert Verdi, with a keynote address by Norma Kamali the night was a splendid celebration of inspirational achievements.

Once again the big winner was New York-based fashion label DKNY, taking home awards for Best Twitter and Best Blog by a Fashion Brand, both of which are run by Donna Karan International SVP of Global Communications, Aliza Licht.

The ceremony also included the first Fashion 2.0 Visionary Award, which was presented to Gilt Groupe founders Alexis Maybank and Alexandra Wilkis Wilson, in acknowledgement of their achievements and leadership as ‘e-commerce game-changers’ and their impact on the way the fashion industry, particularly luxury brands, perceive the online space.