As an avid news reader and tech enthusiast, I stumbled across the story of Feminist Hacker Barbie. For those who don’t know, a story was written in the 90’s that was to portray Barbie as a programmer and game developer. However, when you read the story it is very disappointing to find that Barbie is portrayed as incompetent and dependent on men to solve her problems.

What is just as disappointing is some of the outpour to this entire debacle and especially the stories that were highlighted on popular publications including NPR and The Verge and Gizmodo.

It is true that this was written in a different time. It is also true that the story itself is a failure to what it could have been – a positive role model to young girls to do what they love, get involved with technology and build a ‘go-get-it’ attitude. We see this nowadays with the Maker Movement.

Part of the backlash that occurred was a crowdsourced rewriting of the original story, started by Kathleen Tuite and Casey Fiesler. After initially reading the story on NPR, I found many other sites featuring rewritten panes. I was hoping for something inspiring and instead what I found was actually quite contrary and truly disappointing.

Rather than simply rewrite the story with Barbie at the helm and in a positive light, many of the submissions show an implicit hatred towards Ken and other male characters. In the below picture we see the following examples of ‘Ken the misogynist moron’. While it is my opinion that Ken was never exactly portrayed as a bright fellow, I must ask, is it right to fight hate with hate? Misogyny with Misandry? More importantly, does this help the feminist movement or hinder it? These writers had an opportunity to show what women are capable of and instead took the cue to find the same faults they are accusing the opposite sex of. Is that the solution to bettering women and equality?

Casey Kiesler thinks that this is appropriate for little girls. Who needs mutual respect when we can raise a generation of girls who view boys as oppressive morons?

Here we see another example: “It will go faster if Brian and I help”, offers Steven. Programming is not a team sport”, Barbie says.

Actually, programming is often a team sport, and inspiring collaboration is a key part of leadership. If we want to offer positive role models to young girls, is it right to indoctrinate them this way?

Here are a few more examples from The Verge. The author, Cassandra Khaw (@casskhaw) says “These are some of my favorites”.

‘You wage wars, murder, cheat and lie to us… 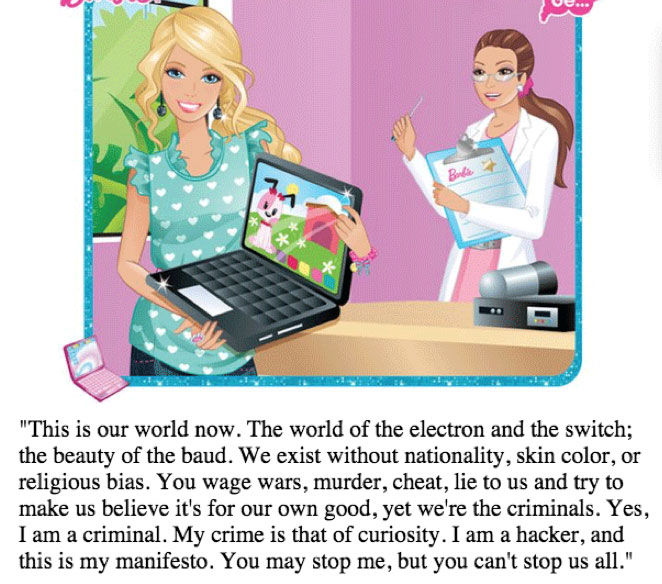 Why not show Barbie in a collaborative and supportive light, working alongside and leading with others instead of as a lone wolf that sees herself as better than others and competing with men? Can feminists put aside past pains and hold back on lashing out, especially when it comes to the formation of little girl’s development? I have myself been in situations where I have been at a disadvantage based on my gender and used this to build empathy rather dwell, fester and seek revenge.

I want to be clear, I want to see women have equal pay, be in leadership roles and be portrayed as intelligent and hard working. I want her to win that promotion and for girls everywhere to not grow up thinking they are disadvantaged in the workforce based on their sex. I want equality and judgement to be based on merit not on chromosomes. Equality is not a zero sum game, we should seek to extinguish hate and injustice, not just simply move it around.