Home Celebrities The Rundown on Coachella – Parties, Places and Faces 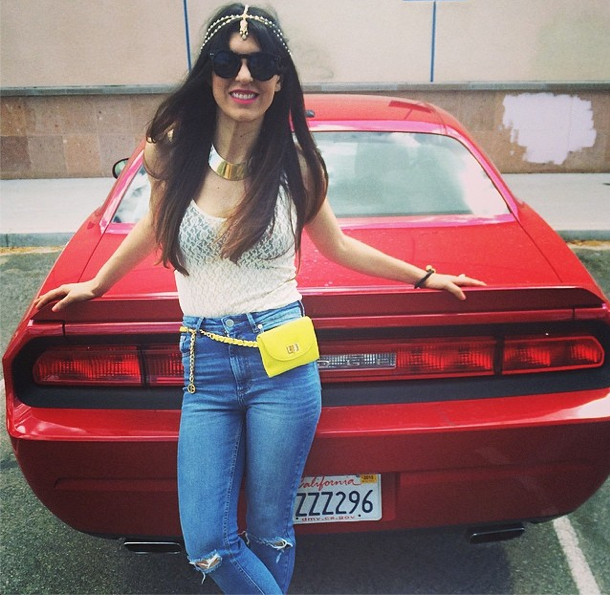 After months of looking forward to Coachella, it came and went, and although it only ended a few weeks ago, it feels like it’s been a lifetime. I went weekend 1 which was from April 11-13th. Since coming home, I’ve had every type of reaction — everything from ‘tell me everything’, to just total slander. I actually find it quite shocking that people got so annoyed by the amount of Coachella posts they had in their feed (fortunately not from me, I’ve been told by several parties I did not over post). Frankly, I understand the jealousy, if I don’t make it next year, I will be incredibly jealous of everyone that does. What I don’t understand is the amount of comments of people who have never been that have strong opinions on what it’s like. And how promotional and expensive it is. First off, it’s the most well organized music festival I’ve ever been to. Props to Coachella, we would park and be able to get out of the lot in minutes every time. As far as promotional, there wasn’t a single flyer or marketing person on the grounds. Lastly, for the amount of amazing bands I saw, I can now say Coachella is a deal at $350. Most of the performers charge upward of $100 to see their show — many of which like Pharrell and Lana Del Ray, and much more. So rather then play into the absurdity let me just give you the run through of all the awesomeness (and what it’s really like).

At the bottom of this post I’ll cover all of the logistics, what airport(s) to fly into, lodging and transportation! 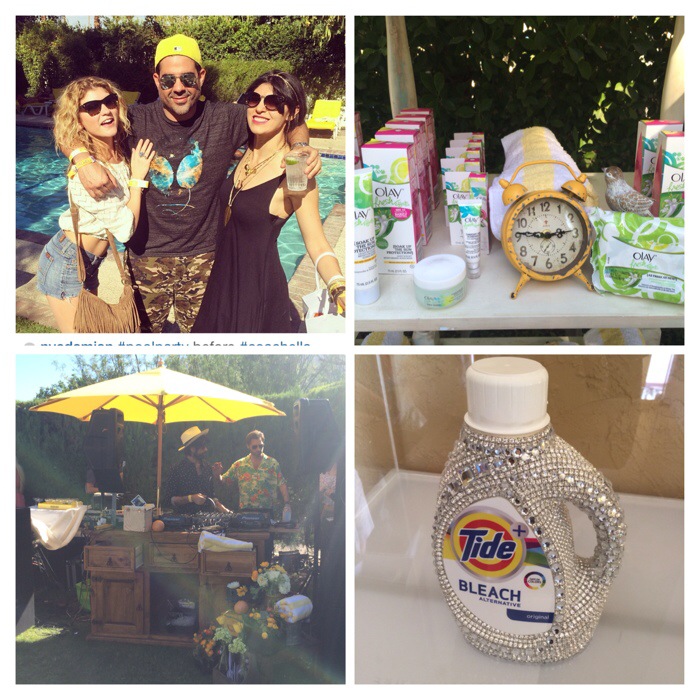 Day 1 you want to ease yourself into the weekend. Especially since most of the major parties happen over the weekend. The lineup of the bands and times they perform is what dictates your day. We kicked off the day at the BMF Media Music Lounge which hosted a party poolside at the Ingleside Inn for all three days of the festival. The event which included performances by Mia Moretti, Jermaine Dupri and CC Sheffield, and attracted celebrity guests including Katy Perry and Jennie Garth. Both of which I love but my group left before they arrived (oh well!). We had a few drinks, did a little tour with Olay Fresh Effects, Herbal Essences and Tide Plus (all sponsors) and stocked up on some dry shampoo and moisturizer. Tide also provided some detergent packs on the go which came in very handy since our condo had a washing machine. 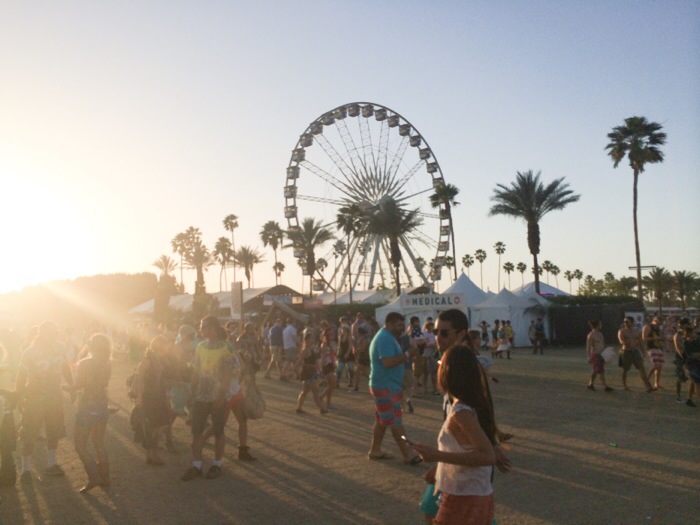 We then headed down to Coachella to hear Ellie Goulding, Bonobos (who I wasn’t familiar with but really enjoyed!), Zedd, (welcome to the light show! very cool, but I only lasted a few sets), Bastille and of course headliner OutKast performed. OutKast got a lot of criticism by fans for a mediocre performance. Frankly, I’m not the biggest OutKast fan, I enjoy them but I’m far from their #1 fan so I thought they did fine. Although weekend 2 they apparently rocked it and showed fans what was up. 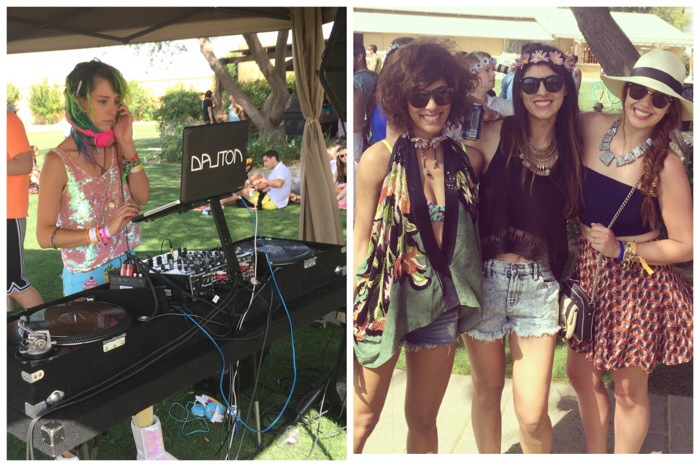 Day 2 it was balls to the wall, game on! We started at the UGG Australia/StyleCaster party, which was so fun! I ran into some of my blogger friends, Christina from Trop Rouge and Jenni from I Spy DIY. The full on pool party had all of your UGG needs from sandals and shoes (all gifted) in case you wanted to take a dip or play golf on the mini-golf course! Wen was also on hand giving out hair products, and hosted a fun photo booth while DJ Dalton served up some old school tunes. 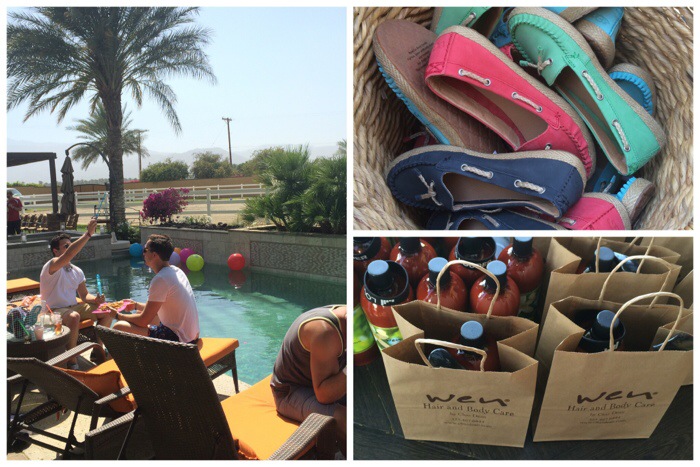 We then headed to the LACOSTE Beautiful Desert Pool Party where I met up with one of my favorite Chicago blogger, Jenna from Chi City Fashion. I managed to miss Katy Perry again! This time by mere minutes and she was sitting with Steven Tyler (ugh!). Not that there was anything to complain about. The property was gorgeous, and Lacoste served up an endless pour of Moët & Chandon Impérial Ice– the first ever champagne crafted to be enjoyed over ice, while Elijah Wood was spinning in the DJ booth, (I had no idea he was a DJ). 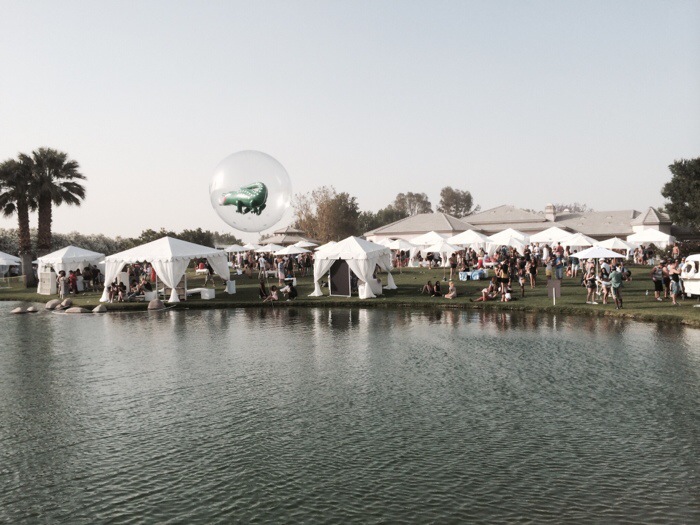 He took a brief break for DJing to join the party and we got a quick photo opp which chatting the actor up (he’s the best!). I’ve literally been a fan since he did North — which I probably watched countless times as a kid and yet I can barely remember the plot line (note to self: rent North). 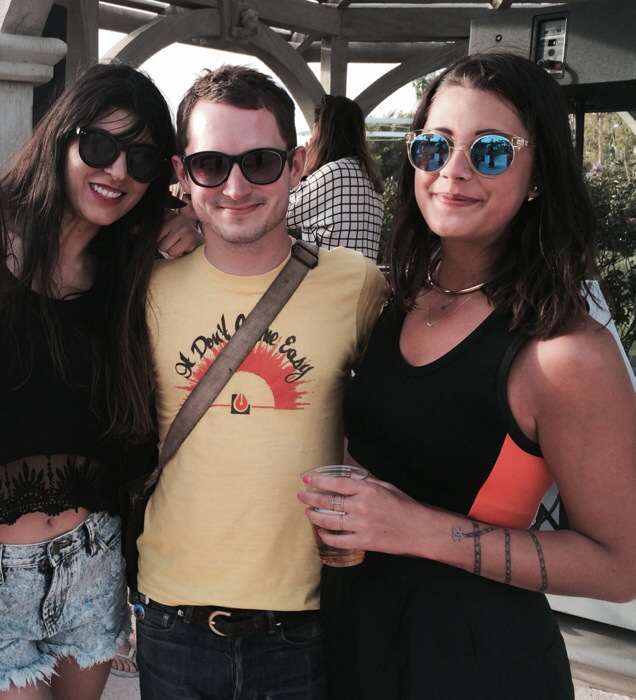 I unfortunately had forgo the Forever 21 Party in the Sky event where Azealia Banks was performing and featured two gifting suites (Forever 21 knows how to party)! I’ve never wanted to be in two places at once, but there were so many acts at Coachella I wanted to see that I would have had to have skipped a bunch of bands to make it, especially since the party was back in Palm Springs. My outfit however (above) was all Forever 21, I was completely dressed for the party! 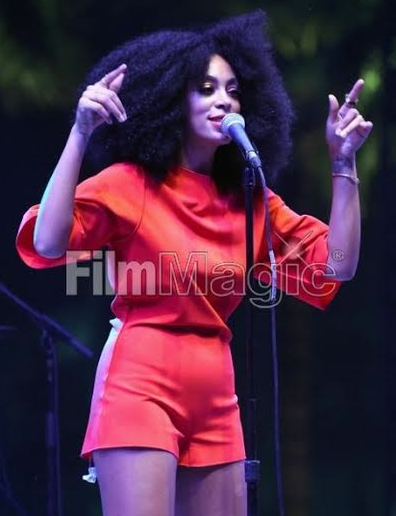 In any case back at Coachella, we walked in to MGMT playing and hung out until it was time for Lorde to go on. We then stopped by to see Solange (who was awesome!) and looked so hot in her red-orange three quarter sleeve leather jacket and romper for Max Mara. We hung out for about 4 songs before heading to see the Pixies (which was my boyfriend’s #1 bad he wanted to see). Of course we left and then Beyonce went on stage (I did a great job at missing big moments). We then stopped by to see Queens of the Stone Age, and Empire of the Sun, followed by an epic performance by Pharrell! He really showed everyone who was boss — he brought out Snoop Dogg, Busta Rhymes, Diddy, Nelly and wait for it… Gwen Stefani. Decked out in his Arby’s– I mean signature Vivienne Westwood hat he really put on a show. And weekend 2 guests didn’t miss out he brought out Jay Z, Pusha T, and T.I.! We then closed out the night watching Muse that did a epic Nirvana tribute covering Lithium. 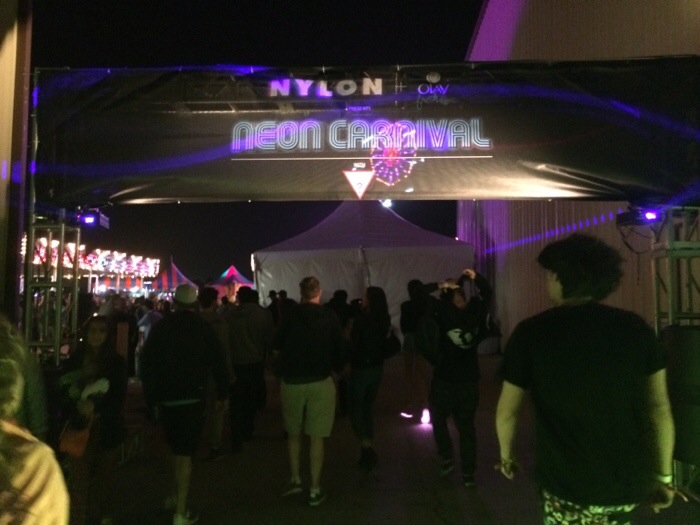 We then headed over to the it party of Coachella, Neon Carnival. Bright lights and tons of carnival rides – the space was fully equipped with a Ferris wheel, giant slide, bumper cars, games, food trucks… they had it all — plus multiple bars and a killer dance floor. It’s no wonder this party was the hot ticket in town! Fortunately, we picked up our wrist bands earlier in the day because the line for the party was wrapped around the corner and then some. Held at Tradition Aviation, the space was surrounded by private planes– how sick is that? The event was hosted by Nylon Magazine with Olay Fresh Effects and Guess. We owe Olay a huge thank you, not only for giving out their face wipes (which becomes your everything when you’re in the desert) but also for being the ones to invite my team. The party was so fun and because I was really good at leaving the other parties someone really big showed up –I say this fully not caring that I missed some great celebrities I listed above –I was slain to have left right before Jared Leto and Emile Hirsch showed up. Fortunately, not even missing My So Called Life since middle school to adulthood crush could take me off the epicness which was Day 2 of Coachella (and knowing I was less then 24 hours from seeing Lana Del Rey). 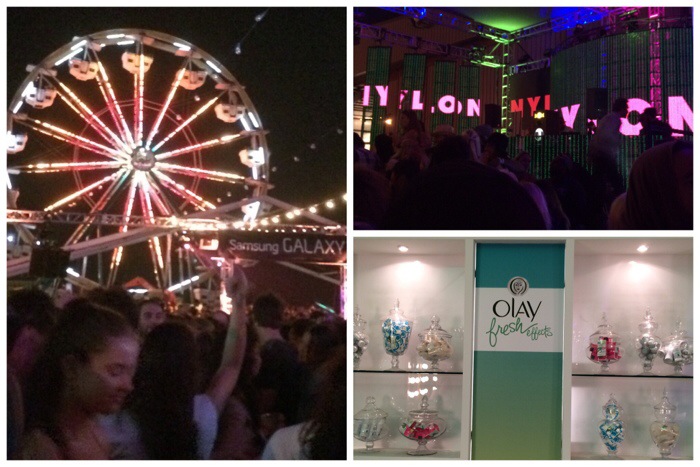 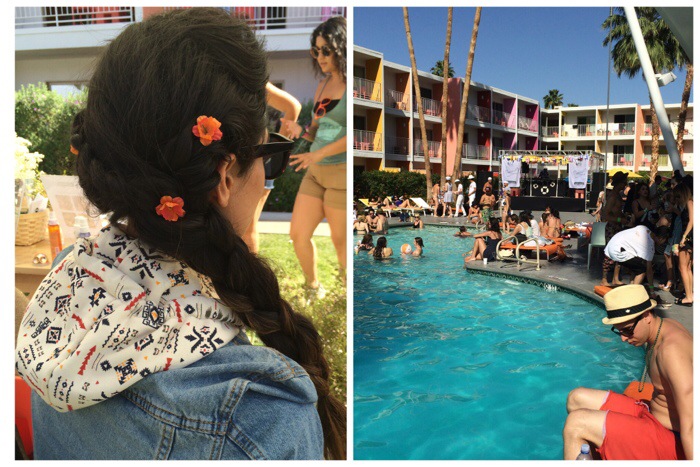 We started day 3 with Klorane at the Saguaro hotel, where the hair brand hosted a braid bar poolside offering guests a variety of boho-chic braids. After being in the desert for the weekend, my hair was in desperate need of an out-of-my-face hair do and the amazing side braid I got was exactly what I needed to close the festival. 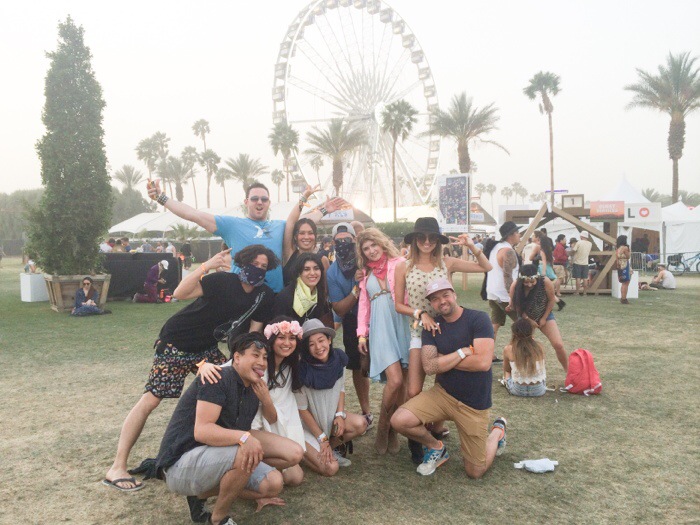 After that we went straight to Coachella to take in the last day. I was hoping to make the 1975 and Blood Orange but we got their a little late. We did however make it to Flosstradamus, Neutral Milk Hotel (which something was seriously lacking in the acoustics I’ve heard they are usually way more impressive), Calvin Harris, and then to see the love of my life perform, Lana Del Rey (who was the #1 person I wanted to see). 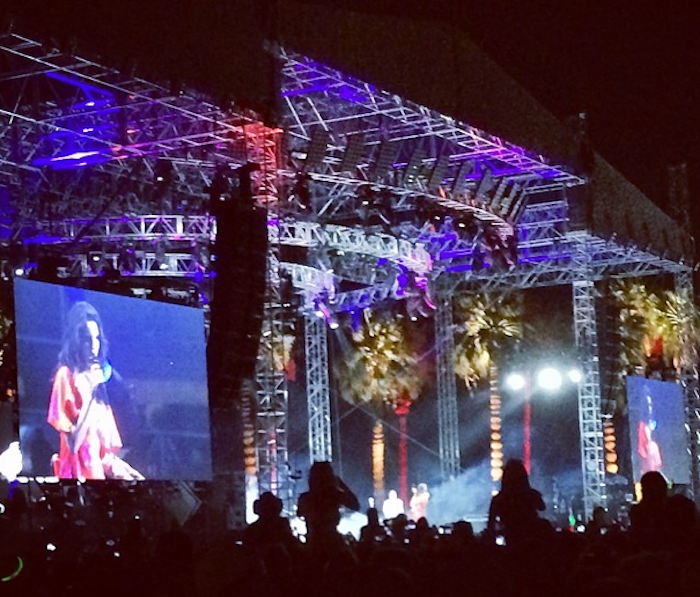 After touring abroad forever, this was Lana’s first show back in the states and she was every bit as sultry (and then some) in person as she is in her videos. She had this very seductress lounge singer things going on. She kicked off her shoes, asked if she was allowed to smoke on stage and then made several appearances off stage kissing front row guests and hugging audience members. The crowd was going wild — her security looked like they were about to have a heart attack. It was perfect.

We then saw Beck (who was probably one of the best performers of all of Coachella!). He put on a great show and his son was on stage with him playing the tambourine, (so cute!). We then hit up the end of Disclosure, while we waited for Arcade Fire to go. I don’t really listen to that much Arcade Fire anymore but I have to say they did an exceptional job closing out the night. They are phenomenal in person, and have such a great range of talent up on stage with them. 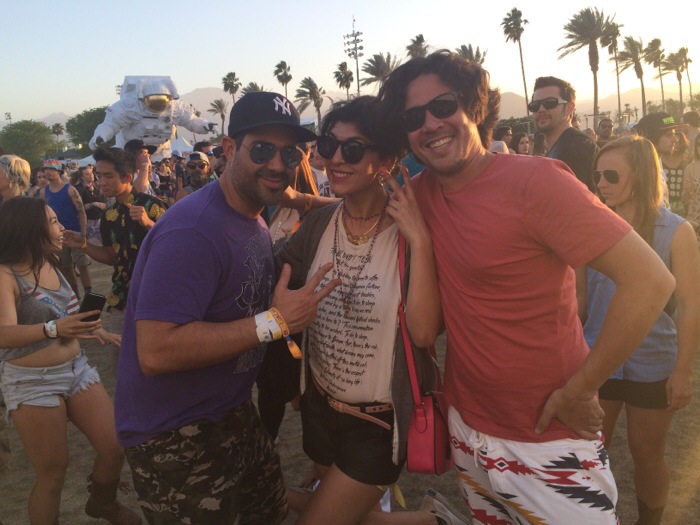 And then it was over… and now I’m excited for next year!

For anyone thinking about going to Coachella, here’s how it works:

Coachella runs for 3 days over two weekends. This year, weekend 1 was April 11 – 13, weekend 2 is April 18 – 21. As I mentioned I went weekend 1. Coachella is about 20-30 minutes outside of Palm Springs so generally people either fly into LA and drive or Palm Springs airport. I’m a Santa Monica/Malibu girl at heart so James and I tacked on a few extra days in LA on both ends of our trip.

Transportation: You can either rent a car (which is what we did) or take car services/cabs to get around. There are also several shuttles around Palm Springs that take you to the venue.

Logistics: Most people stay either near Coachella or in Palm Springs proper, as I mentioned they are about 20-30min apart divided by a major highway. Near Coachella is where all the big house parties are — brands rent out these glamorous mansions. While Palm Springs are where all the hotel parties are. Between all of the shuttles and car services you can stay in either depending on preference.

Lodging: Tenting is an option (although not for me, I love my camping but with all the events and parties I want a comfortable place to shower and get ready for the day). Otherwise you can stay in Palm Springs, which is where most of the hotels are rent a condo, which is what we did. If you’re in a group you can get great places (or condo was 2 rooms, 2 couples, and came out to $50/night per person), and was super nice — we had a hot tub and pool on the property. Otherwise there are houses closer to Coachella.

If you have any questions about Coachella, tweet me @prettyconnected!