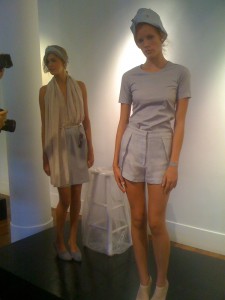 As a Gossip Girl fan, I’ve been drooling over the designs of  Eleanor Waldorf since Season 1. However it wasn’t until Season 2 that I learned Abigail Lorick was the real-life ghost designer behind the character’s collection; so imagine my excitement to receive an invitation to attend her Spring 2011 collection.

Hosted at Philip Pelusi’s Tella Design Studio in the meatpacking district, Lorick previewed her collection during NY Fashion week. Titled Linear Dawn and inspired by painter Agnes Martin, it was a very whimsical collection with asubtle palette of muted purples and blues. The clothes we’re effortlessly chic with fabrications of organza ageorgette and chiffon. It was cohesive and yet each piece was very unique, down to the styling.  With neutral makeup and rosy cheeks, some model wore their hair down with hats, while others in a low bun.

While backstage I noticed all the model’s shoes we’re wrapped in nylons. I assumed that was some new, clever way of keeping them clean until show time –until I saw them walk on stage that way. I’m still not sure how I feel about that look but hey, at least it’s different!

MORE ON THE MAKEUP: 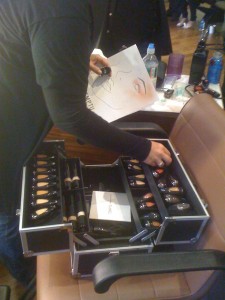 To compliment the collection, Deanna Melluso, key makeup artist for TEMPTU created a look that was clean, subtle look with rosy cheeks to create a ‘sunkissed city girl’.

MORE ON THE HAIR!

Styled by Philip Pelusi (and team), he created a simple look made to look like it wasn’t ‘done’ and resemble an early 30’s look with a modern twist. Using P2 products, he mainly used Beachcomber and addition to Industrial Hold Spray or Rivet for medium hold depending on the look as well as styling treatments decrease and RefresHair. 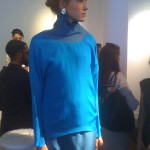 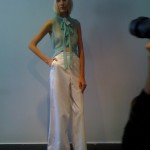 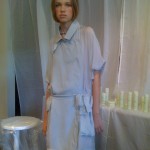 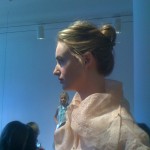 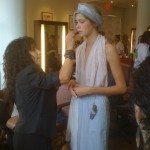 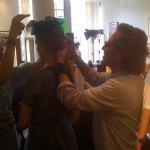