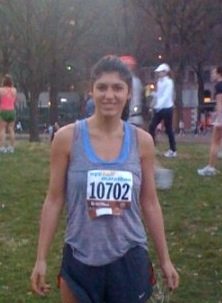 I’m going to cut to the chase since this turned out to be a rather long post.  So for all of you who would like to be spared the page long story . . . in a nutshell, I ran the New York City Half Marathon (13.1 miles) this morning in 2 hours, and 11 minutes.  My first race ever as well as the longest distance I have ever run (by far) without stopping!  Despite not being able to feel my legs, this was quite possibly one of the most amazing experiences of my life.  How did I get myself into this mess?

My story begins last November at Morandi.  I attended an intimate birthday dinner where one very charming and persuasive ABC weather girl, Heidi Jones managed to convince the entire table of 6 that running the New York City Half Marathon was a great idea.  That is until the next morning when the wine wore off and suddenly the thought of doing 13.1 miles to a bunch of otherwise non-runners seemed doubtful.  Some emails circulated, much grunting was done, but with Heidi’s offer to help couch our team ultimately 5 of us (the 6th had an injury so she was off the hook) agreed to sign up.

The funny thing about making that choice to run a major race as a beginner is that it’s both exciting and terrifying at the same time.  You’re ultimately committing yourself to donate a huge portion of your time to something you don’t enjoy doing with the understanding that maybe it will become something you love.  Or at least that’s how I felt about it.  I found running boring.  Sure a mile here, a mile there if on the rare occasion you found me at a gym; otherwise I prefer to walk.  How else can I explain twenty-some-odd years I never took it up?  But then you see all those people who genuinely seem to enjoy it, as if it’s not only this thing that makes them feel (and look) great, but also offers some type of release.  And when aren’t New Yorkers looking for that way of just disconnect from all the over stimulation the city has to offer –if only for a little while? 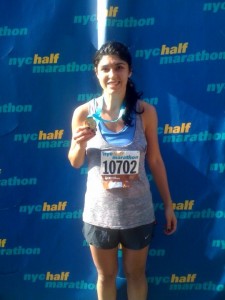 Now the funny part about running an official NYC Half-Marathon is you pay all this money to enter a race where ultimately (and in many cases) you can be rejected.  And on top of that it sells out almost instantly, so it’s important you apply as soon as the lottery opens. And although something feels off about that, come December 1st, as soon as the clock hit 12:00pm, I was on the nyrr.org website, credit card in hand applying.  I would be lying if I said a huge part of me wasn’t hoping I wouldn’t get in.  Don’t get me wrong, I’m no quitter, but give me an out and I’ll take it!  Forget my hype about disconnecting from before, 13.1 miles was insane for me to attempt, considering I get winded just crossing the street!  But now it was in the hands of fate, the results would not be in until January 6th so I did what any sensible work-from-home consultant does when it’s freezing cold out –I went to Hawaii for a month.  I shopped, I camped, I laid on the beach, but what I did not do was run.  Then the email came promptly on the 6th –I was accepted. Eeek!

Some of you may remember my post from that week — it was official, I was doing it and I needed help.  By the time I was back from my trip I had 2 months to train.  To make things worse, Heidi was injured and it was freezing cold in New York.  But ultimately everything happens for a reason, and I received so much support and great tips from my readers and friends, I decided not to drop out.

Instead, I joined the LA Sports Club (at Rockefeller Center) for 2 months, and the North Brooklyn Runners group.  I committed to running 2 miles a day for at least 4 days a week and kept that up for a good month.  Had a bit of a hiccup when I took a 5 day trip to Costa Rica, then got back and have spent the last 3 weeks being diligent.  I ran to Williamsburg and back from Long Island City, averaging a couple of two mile runs a day.

Everyone from my original group had dropped out minus Raffi, the birthday boy.  Last week we took our first ‘long run’ –we made it 5 miles.  Needless to say, I wasn’t doing very well at this training bit.

Last night was the moment I had been waiting for, in fact it was the only part in all of this that I was truly looking forward to; the epic night before a marathon big bowl of guilt-free pasta!  This morning I woke up at 5:30am completely nervous and slightly sick to my stomach at the thought of doing this race.  Having never run more than 5 miles consecutively in my life, I was completely unprepared.

Then the gun went off and the crowd began to run.  The course was essentially around central park, then down 7th Ave. to 42nd street, then across to the West Side Highway, and down to Chambers Street.  The hills in Central Park were tough but I knew if I stopped at any point it was over; motivating to run after walking would be too hard so I kept a steady pace, concentrated on my breathing and took in the scenery.  I never expected to make it through the race, but I really wanted to at least get out of the park.  Being cheered for by the crowd, motivated by my neighbors and even more so seeing each mile marker as I ran by them made me blink and suddenly I was done with the park portion of the run and had completed 8 miles!

The feeling of exiting the park and running towards Times Square (on the street!) was the first moment where it truly felt special, and like I was doing something really amazing.  Nine years in NYC, I’ve never experienced Times Square or rather the city like this!  Then before I knew it I was at the West Side Highway, just a straight shot down to the finish line, a mere 4 miles away.  At that point, I was in pain but miles were just number, numbers that would get smaller if I just paced myself or took a few minutes to get lost in the entertainment and bands.  Then I hit mile 12.  At this point I’m practically done, but every part of me wants to stop until I see my friend Emalee.  The feeling of having your name yelled out and then looking over and seeing your friends in different directions –It’s the best! It immediately rejuvenated me and carried me to the finish line.  I did it! 2 hours and 11 minutes.  Amazing considering I had complete anxiety that I would be in the group of runners that had to be transported to the finish line because they were unable to maintain a 13:45 mile pace.

Then my unofficial coach, Fernando was there, conveniently volunteering and awarding me my medal as my friend Shant was cheering me on.  All I can say about this experience is we’re stronger then we think, and as the wise multi-marathon runner man on the subway told me this morning ‘it really is mind over matter, when it comes to these things’.  Even so, I’m completely amazed by what our bodies are capable of doing.  Especially with the support of our friends, even the ones we’ve never met before.

Raffi crossed the finish line a few minutes before I did.  We took our victory picture and it was done.  Today was an amazing day, with perfect weather.  For that, I thank Heidi!