After Sundays much anticipated 2-hour premiere of AMC’s Mad Men, which drew in a jaw-dropping 3.5 million views, we saw Jessica Pare really step into the limelight with her on-air performance of 60s hit ‘Zou Bisou Bisou’. On Monday, I posted that Lionsgate was releasing Pare’s rendition to iTunes (now available for purchase) and since then I’ve had the pleasure of interviewing the actress!

While she was careful not to give too much away about what’s yet to come for her character, Megan Draper (she’d hate to spoil the surprise) we did get some time to talk beauty, costumes, her new ‘Zou Bisou Bisou’ single and of course Don Draper!

How does it feel to be in the spotlight and to have performed the ‘Zou Bisou Bisou’ scene?

Jessica Pare (JP): I’m thrilled, it’s so exciting. I never thought I would make an actual single. [At the time] it was a gutsy  move and a lot of fun to do. And certainly a lot of the awkwardness and embarrassment was felt. I think

END_OF_DOCUMENT_TOKEN_TO_BE_REPLACED 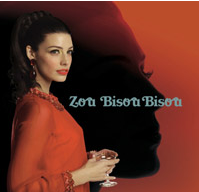 Last night, like many of you, I tuned in for the highly anticipated 2-hour premiere of AMC’s “Mad Men”. Now in it’s 5th season, I think we can all agree the most unexpected moment (or for all you men out there, highlight) of the episode was Jessica Pare’s sultry performance of ’60s french pop hit ‘Zou Bisou Bisou’.

Loved her rendition? Well good, because it’s available for download. Lionsgate Television Music, the music arm of the studio’s TV division, is releasing Pare’s recording of ‘Zou Bisou Bisou’ (which loosely translates to “Oh you, Kiss, Kiss”).  The single was released digitally at midnight on iTunes, with special limited edition vinyl to be sold through the AMC store.