Home Tags The Beatles on Broadway

Tag: the Beatles on Broadway

Rain: A Tribute to The Beatles On Broadway 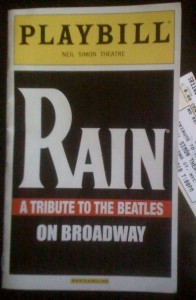 I consider myself a Beatles fan; correction, I am a Beatles fan. Growing up, it was a musical compromise between my parents and myself and would often be played in my house. I remember going to my friend’s 9th Beatles-themed birthday, and being envious I didn’t think of that first –although I didn’t know nearly as many of the words or songs that she did so only fair.  That and everyone really got into dancing around to Yellow Submarine, which always made me feel like a traitor –I confess, I do not like that song.

One of the many perks of having a friend that works in television is seeing his name show up on my caller ID and upon picking up, hearing ‘Lar- what are you doing at tonight at 7pm, I have an extra ticket to…’.  That’s generally the part where I say I’m free and then try to weasel out of an event. In the case of an extra ticket to ‘Rain: A Tribute to The Beatles On Broadway’, I have to say I was pretty excited.

Here’s What to Expect: 3 generations of audience members, with a crowd of embarrassed (but equally enthusiastic) 14yr olds watching their parents let loose, to the single man in his mid-50s watching the show as if he was back in the 60s, using his program to drum along; and inevitably