We’re getting closer to solving the mystery that’s been surrounding the recent buzz around the new CHANEL No.5 mens fragrance. Last week, CHANEL released virtually no details surrounding the campaign except that Brad Pitt would be the face of the fragrance and with that there was a 7 second video with Brad saying: “What’s the mystery.” (You can see the video HERE). They also released a count down date of the 15th for more details — and what many of us hoped would be the launch date of the fragrance (although CHANEL would confirm nothing) 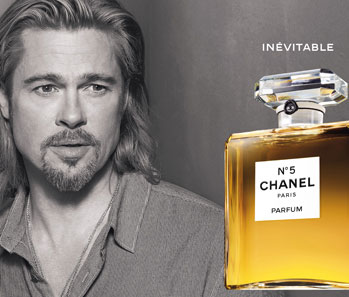 Well good new friends, it’s the 14th and CHANEL has shared with us the campaign and 30 second CHANEL No.5 film starring Brad Pitt. Check it:

I’m so confused by this fragrance! What is the male perspective on the most feminine fragrance of all time? Brad Pitt with long hair, a gotye, and dressed in a casual button-up shirt? I can maybe be sold if he was decked out in a perfectly fitted Chanel tux looking unbelievable sexy and mysterious while still coming off