Home Fashion Do you need glasses? 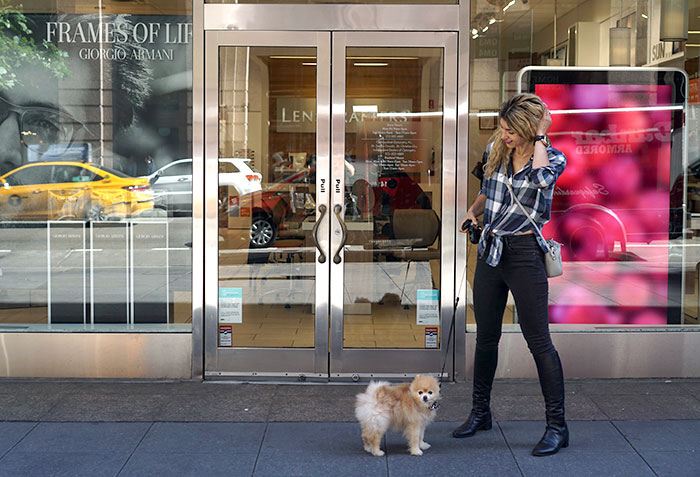 It was a family affair at LensCrafters last week when James and I (and Charlie!) went to for a Clarifye eye exam. James is nearly blind and was overdue to get his eyes checked and update his prescription and I haven’t had an eye exam in over a decade. Which is pretty bad since I think you’re supposed to do it every year or so. From what I remember about the process it’s anything but pleasant, droppers in your eye, blurring your vision and tests for what feels like days. I’m so appreciative LensCrafters gave us the extra nudge to come in to try out their new technology making everything easy and digital (no drops required) and so fast. I’ll admit, I assumed my vision was perfect, at least for the big stuff, like everyday life. But I have noticed the fonts on the back of my beauty products have been getting smaller and harder to read. Which begged the million dollar question — was it the smaller font or do I need glasses? 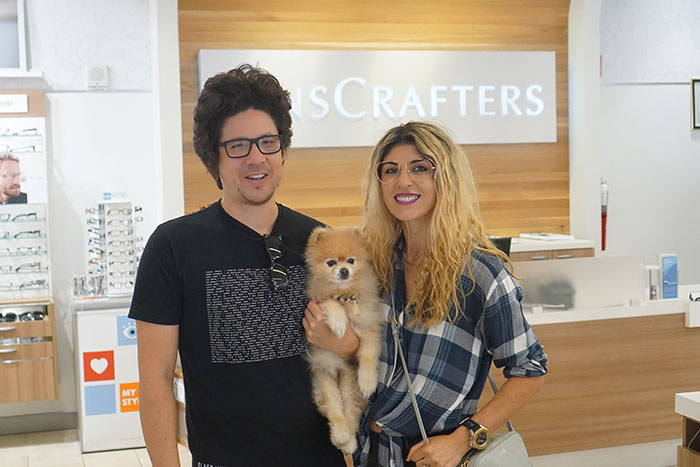 Well let me tell you, I was excited to find out. I actually wanted glasses growing up and remember being disappointment in high school when the doctor said my vision was perfect. I wasn’t remotely attracted to the idea of contacts but I did feel like I was missing out on the fashion of glasses (It wasn’t cool back then to wear fakes since it was considered trying to hard). Fast forward to last week when James and I were blown away by LensCrafters Clarifye digital eye exam. We each looked into some machines that instantly scanned our eyes — they check our vision, producing detailed pictures of our retina and eye health, measuring 5x more optical characteristics then that of a visual exam (it also checked us for glaucoma). Clarifye scans the inside and outside structure of the eye and is the most precise eye exam out there. I mean they worked with Nasa on this technology, so it’s pretty out of this world. What’s also cool is that by using the 3D technology, Clarify simulates how well you’ll see with a new prescription versus how you see now and can even help uncover differences in day and night vision. Which is great since I had a friend (who doesn’t wear glasses) that recently drive me home and said we had to leave before it got dark since she has a lot of trouble driving at night. I was really excited to tell her this eye exam tests for that! I’ve never noticed a difference in my day and night driving but the whole label situation had me wondering if this machine could solve my mystery. After what was only a few minutes of having our eyes scanned we met with the doctor to go over the results. And what do you know, I’m nearsighted!!!!! 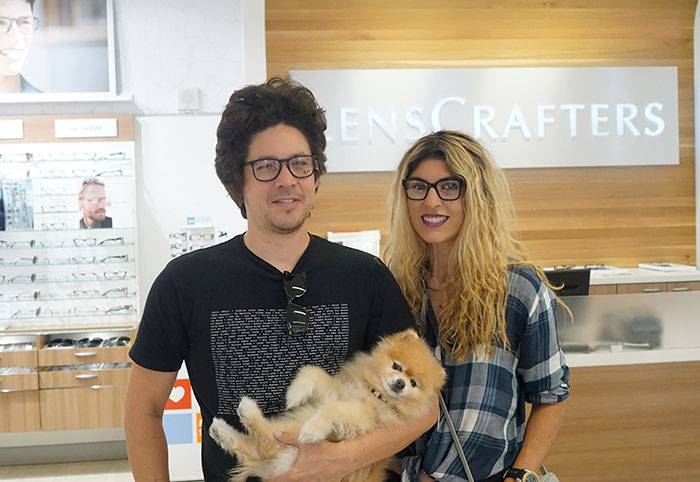 Basically, and with no surprise my day to day vision is fine but when I read small print my eyes take a little more time to focus — like a camera lens that needs to adjust. My Ophthalmologist had me look at a screen and then hold a pair of prescription lens in front of me to see the difference. And in both cases I could read the script but with the prescription my eye adjusted quicker and without stressing out my eye.  For James, needing a mega prescription lens came as no surprise, but he’s never going anywhere except LensCrafters to get checked since usually the process for him used to be so brutal. He literally was so overdue because he dreads the doctor visit so much, but LensCrafters made it a walk in the park! 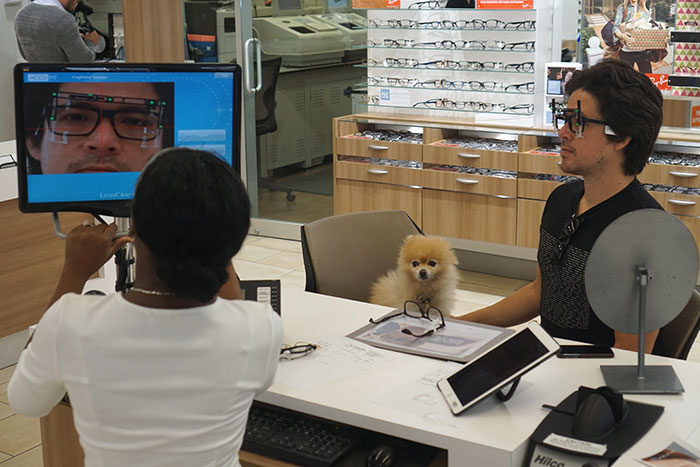 After our prescriptions were written we played with all the different frame styles. I was debating between the new Miu Miu black frame glasses (so new they aren’t even on their site!) or putting in prescription lenses in the classic Ray-Ban Aviator sunglasses. James was between a pair of square matte Armani frames and Ray-Ban frames as well. We left it up to the staff and I did the Miu Miu prescriptions, while James did Armani’s (although he was impressed he may go back for the second pair, they offer a mega discount on your second purchase). I did the Aviators san prescription as well for fun and may have them eventually filled. Who know what my site will be next year! But at least now I’m not intimidated to find out. 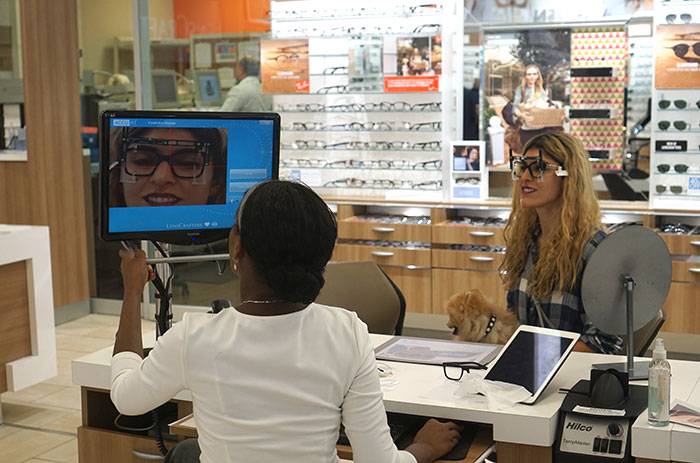 After we selected the glasses, LensCrafters does this cool thing (which is shown above) where they look at how you wear your glasses and look through your glasses to custom fit the prescription to the lens. Mine were ready within an hour. James’ site was so bad he needed the lens be sent out for what could be up to 2 weeks (it took 2 days!). 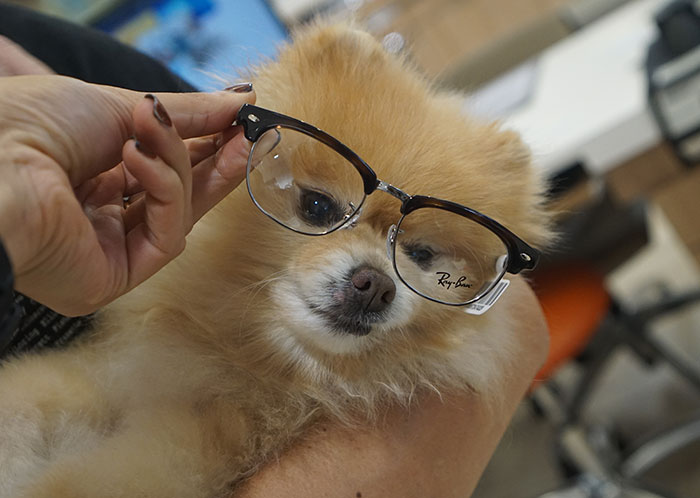 Charlie sight is starting to go as well, clouding is common in Pomeranians as they age so we found a pair for him as well! JK… well kind of, the part about his site going is true, and I wish they had a dog unit but alas at least they have one for kids! Carlifye is a great option for children since they can just have their eyes scanned instead of answering questions which make it easier for doctors to test their vision, especially for kids who aren’t old enough to read. Doctors can also the show a side-by-side comparison of a child sees the world with and without glasses. So cool!

If you’re overdue for an eye exam, I can not recommend going to LensCrafters enough, no matter where you fill the prescription. It was so fast and easy! We were at the LensCrafters on 1166 Avenue of Americas (at 46th street, NYC) and they took amazing care of us.

Thank you LensCrafters for the glasses and helping us motivate and take better care of our eyes!