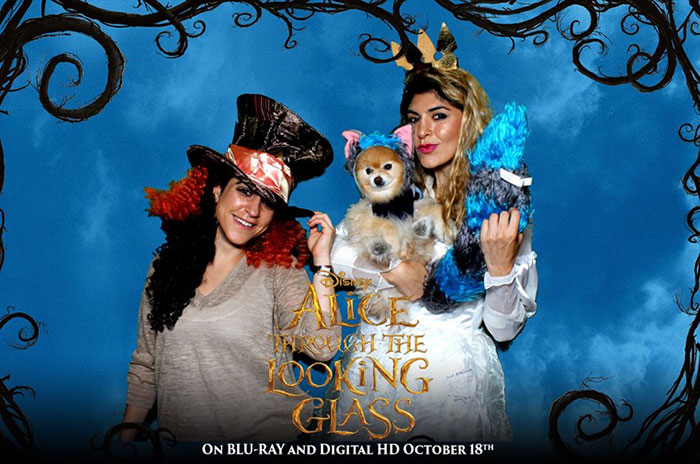 This week I did nothing but pack and try to get ready for the 4 trips I have coming up, starting with Lisbon on Monday! I did such a good job packing and getting all the forms — and multiple vet, office, airport visits — to bring Charlie with me (it just costs as much as a human ticket in certifications and fees and two days of your time but no biggie) that I decided to reward myself with taking the morning off from adulting to join Disney and ahem, costume designer, Colleen Atwood for a tea party in celebration of Alice Through the Looking Glass, which comes out on DVD and Blu-Ray this Tuesday, October 18th. I brought my sister and Charlie since we’re all huge Alice fans, and had a blast in the photobooth — Charlie steals the show as the Cheshire Cat. 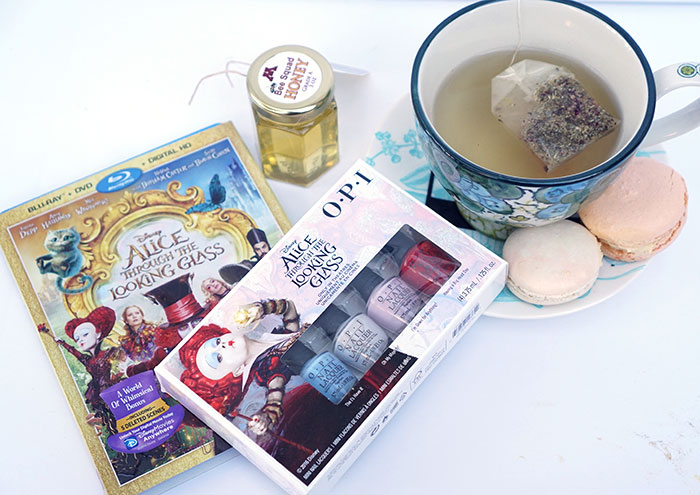 Alice Through the Looking Glass is the sequel to Alice in Wonderland and brings all of our favorite characters back: Johnny Depp, Helena Bonham Carter, Mia Wasikowska, Anne Hathaway with the addition of Sacha Baron Cohen who plays Time (as in literally time). Despite a relatively bleak plot line that boils down in Alice traveling back in time to save the Mad Hatter’s family, each scene is so visual, there wasn’t a moment I wasn’t entertained.  Thanks in large part to costume designer, Colleen Atwood who outdoes herself with every movie she heads the costumes for. It was quite an honor to sit at a table and have tea with the woman behind the costumes fro both Alice movies, Miss Peregrine’s Home for Peculiar Children, The Huntsman movies, Sweeny Todd, Big Fish, Planet of the Ames, Mars Attack, The Silence of the Lambs, (the list goes on forever…) and of course Edward Scissorhands. 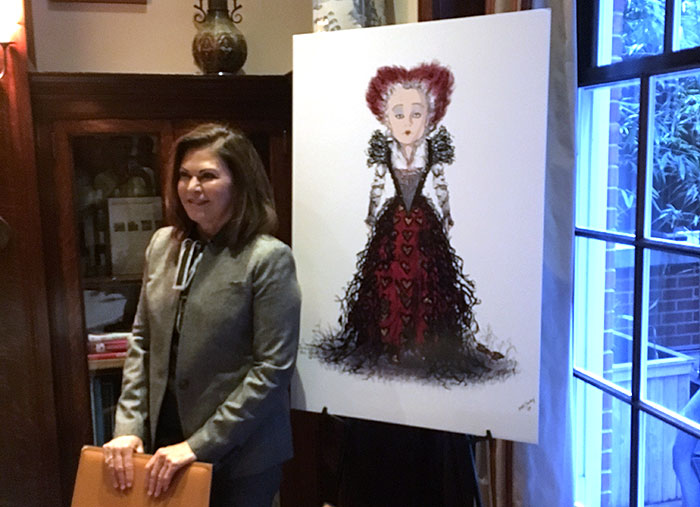 In our talks I was so surprised by how much I related to Colleen, despite her being a total bad a$$ in life and well, I’m good at writing a blog. Everyone thinks I live this glamorous lifestyle and I’m so busy all the time I’m usually pulling together my looks for campaigns and tv appearances within 24 hours of the date. When you run around a lot it’s really a challenge to stay organized but it’s a blessing to make it in any of these industries and no one better reminded me of that the Colleen in her talks. When asked about her success and any advice her response was, “I really think the success I have had has been 50% luck. I have to be really honest. I’ve been really lucky and blessed in that way, but I also think if you have sincere-ness and heart, and if you work really hard at what you do, you have success.

I also asked her favorite character since she’s pretty much done the costumes for every fantasy like movie I love. “That’s hard. I think in the flow of my life of designing it’s been fun to look at the things I’ve done with Johnny {Depp} — from Edward Scissorhands, Sweeney Todd to Ichadod Crane over the years,. It’s like all different things but my collaborations with him has been one of the things I hold dear and I loved doing Charlize’s’ {Theron} badass huntsman woman outfits and Alice on a sweeter note.”

I think for my next grand adventure I’d like to go to Disney World. I’ll ask for that for my birthday next week. Until then, I’ll take in the magic and fantasy of Alice Through the Looking Glass available on DVD and Blu-Ray Tuesday, October 18th.