Due to the high altitude, when we first flew into Cusco, we left immediately for the Sacred Valley and Machu Picchu and we were excited to explore it on our way back. Cuzco is a magnificent city which dwarfs anything around it and is filled with great architecture, history and food. Being so high above sea level means having to watch your physical activity, but since we had already acclimated in the Sacred Valley for a week we felt pretty good to go.

It is the historical capital of the Incas, and was built to a great detail. When the Spanish conquered, they utilized the existing stonework of the Incas which makes for some interesting blends of Spanish-Inca architecture. While it may be talked of as a tourist trap, a rich history is apparent everywhere you look.

We stayed at the Inka de Palacio which was centrally located near the Plaza de Armas as well as other sights that we wanted to see. Entering the property we were absolutely shocked at how incredible it was – it’s as if we were staying in a castle and museum, the we found out that it was originally built as a conquistador’s mansion. That conquistador was Pizarro and I would consider it a de facto mansion.

Outside of the Palacio, after walking down a few cobblestone streets we we found ourselves at the Plaza de Armas which is the central square of Peruvian cities. It translates to ‘The Square of the Warrior” and the one in Cuzco is pretty large, with churches and fountains.

Lets not forget the ladies who carry around baby lambs so that you can take a picture of them (for a tip of course!). This is the tourist trap stuff but it’s too cute to pass up.

Lastly, Peru is known for its culinary might and original flavors. We headed out in search of different tastes – I fell in love with the quinoa soups while James raved about alpaca burgers and felt that guinea pigs were interesting but a bit on the gamey side. In any respect, there are great options for any budget. 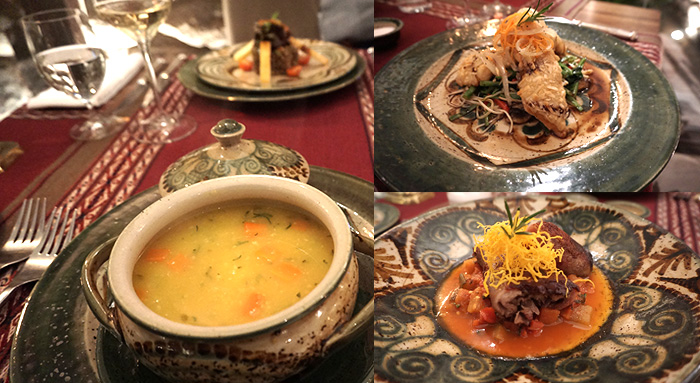 The above meal was at the Inkaterra La Casona hotel – the quinoa soup rated high on our list. The hotel itself was beautiful as are all of the Inkaterra properties. There is no shortage of great culinary options for every taste and budget – especially around the Plaza de Armas area. Many will try and ‘usher’ you inside with a doorman, we recommend that you resist their advances until you take a good stroll and look at your options.

Plaza de Armas, Qorikancha and the many churches around the city. Many don’t allow photos inside.

There are several parks in the city worth exploring, there are also many different markets around. Watch out eating at some of the fringe markets, if you are not used to some of the cuisine and preparation methods you may pay for it.

Art museums and galleries are plentiful, we stumbled upon a Dali exhibit while we were in town.

Cusco is also a great place to seek out Alpaca and other products that can be hard to get in other countries, just watch out for counterfeits and blends. We stuck to known stores and brands, but there are some excellent guides on how to determine real alpaca, baby alpaca and ‘maybe alpaca’.

If we had more time…

We would have sought out more of the fabric and textile markets. Ayniart is a well known fair trade shop that is very community and women focused. Baratillo is a secondhand store that is supposedly worth a visit.