Home Beauty Get the Look: Amy Adams at the NYC premiere of Man of...

As we anxiously await the release of the new Superman movie, Man of Steel (in theatre’s June 14th), I look forward to opening the papers tomorrow to see some of the feedback from tonight’s NYC premiere of the film. One things for certain, Amy Adams (the films leading lady, who plays Lois Lane) dazzled in a black Nina Ricci gown paired with a bold red lip and old-Hollywood Dita Von Teese-esqe hair do created by celebrity stylist Laini Reeves for Moroccanoil. 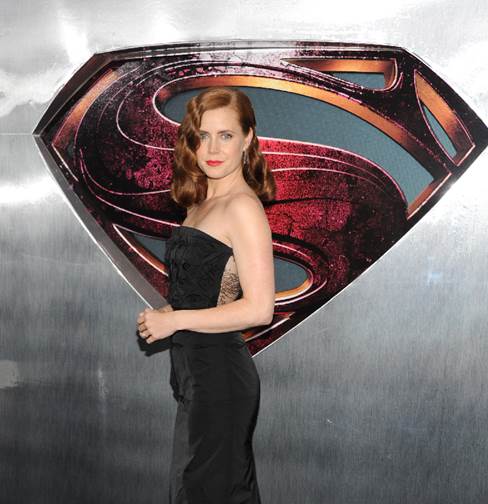 “Amy is wearing a gorgeous black Nina Ricci dress tonight, so for her look I didn’t want to do just a red lip and lighter eyes.  We wanted the look to be a little softer, but with a modern twist. Aubergine and Copper are such a beautiful combination, especially with Amy’s eyes and coloring.  It was a soft, modern twist on the red lip.

I started by prepping Amy’s face with the Votre Vu Attentive Crème du Jour and her lips with the Luxe Lip Moisture lip balm in the bébé Duette.

For the base, I used Votre Vu’s Love Me Deux in Champagne all over and then dusted Beauté en Bronze in Monaco along her hairline, temples, tip of her nose, and under her cheekbones to give more dimension.

Then, on her eyes I used a medium eyeshadow brush and the shade Gilt from the Votre Vu Palette Play eyeshadow quad in Copper (coming out September) and swept it all over the eyelid and a bit along her bottom lashes as well.  It was really a beautiful copper color all around her eyes.  Next, I rubbed in Votre Vu’s Le Joli Crayon in Aubergine along the outer third corner of her upper lash line and along the whole row of bottom lashes.  Instead of lining the bottom waterline, I line just the lashes so that it keeps the eyes looking wide and lively. I finished off her eyes with the Eiffel Power mascara and layered it for thick, voluminous lashes.

To frame her eyes, I used the Votre Vu Arch de Triumphe brow definer in Warm to give her brows a bit more definition.

The lips were the finishing touch!  I applied Votre Vu’s French Kiss in Annette (coming out September), a beautiful bright red color, to her lips.  She looks absolutely gorgeous on the carpet!”