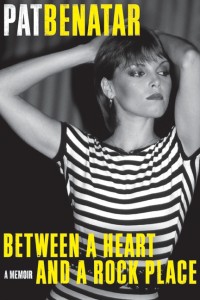 I love Pat Benatar. I have so many memories of her music growing up. She was on Oprah today talking about the challenges of being a female musician in an age of a male dominated rockers. And it’s pretty incredible what she accomplished and how much she helped pave the way for women today. I mean come on, she was the first solo female rocker to appear on MTV! That’s epic!

Anyways, I haven’t read her recent  memoir, but by virtue of the genius of the name of it, I decided to post about it. Ready for it? (incase you missed it in the title of my post or the fact that it’s been out for months and by now this is old news), “Between A Heart and A Rock Place“. If I can judge this book by it’s cover, I’d say it’s very clever!