“We’ve been doing so many wonderful installations around the world, we’ve built all of these beautiful boutiques in Tokyo, Seoul, Taiwan, Hong Kong… but never in New York. We wanted to show New York who we are and I couldn’t think of anyone better to do it with so we really thank you for the opportunity”, said Chantecaille in thanks to her associates at Bloomingdales.

I, of course could not have been more honored to be amongst this class of distinguished patrons in the beauty industry to witness this Chantecaille milestone.

“It’s so nice to work with people who are just such a pleasure to work with, so thank you so much, we are looking forward to great things, we’re off to a great start, and this is only the beginning” said Howard Kreitzman, Bloomingdale’s VP, DMM Cosmetics.

The over-sized scissors were then unmasked and held by Sylvie Chantecaille. The moment was before us, the scissors we’re in place but the ribbon did not cut.  After several attempts and assistance from her fellow speakers, they resorted to a small pair of over-the-counter mini scissors for their big moment.  While that may not have been the plan, the way it unfolded could not have been more charming or memorable.

Michael Gould Bloomingdale’s Chairman, & CEO closed the ceremony with, “there are lots of larger brands but there are none that have as much heart and soul as yours, we thank you, we thank your family”.

I wish you all the best in your new home and congratulate you on the opening! Thank you for having me. 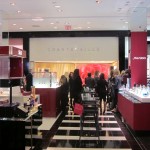 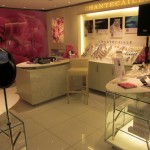