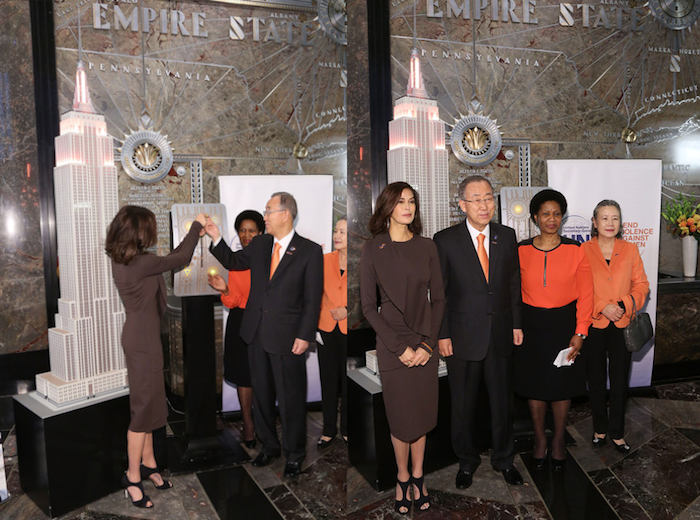 The color, bright and optimistic is to help “Orange YOUR Neighborhood”, an initiative by the UN Secretary-General’s campaign UNiTE to End Violence against Women and to symbolize a world without this pervasive human rights violation that affects as many as 1 in 3 women worldwide. During the opening statements Hatcher admitted to being apart of that statistic saying she is “the 1 out of 3 that was abused.”

The International Day to End Violence against Women is commemorated worldwide on 25 November. The Day also kicks off the 16 Days of Activism against Gender-Based Violence, an international campaign which runs until 10 December (Human Rights Day).

About the UNiTE campaign: Launched in 2008, the United Nations Secretary-General’s UNiTE to End Violence against Women campaign aims to raise public awareness and increase political will and resources for preventing and ending all forms of violence against women and girls in all parts of the world. The campaign is managed by UN Women. Find more at: http://endviolence.un.org

About UN Women: The United Nations Entity for Gender Equality and the Empowerment of Women (UN Women) is the UN organization dedicated to gender equality and the empowerment of women. A global champion for women and girls, UN Women was established to accelerate progress on meeting their needs worldwide. UN Women supports UN Member States as they set global standards for achieving gender equality, and works with governments and civil society to design laws, policies, programmes and services needed to implement these standards. It stands behind women’s equal participation in all aspects of life, focusing on five priority areas: increasing women’s leadership and participation; ending violence against women; engaging women in all aspects of peace and security processes; enhancing women’s economic empowerment; and making gender equality central to national development planning and budgeting. UN Women also coordinates and promotes the UN system’s work in advancing gender equality. Find out more at: www.unwomen.org