Skincare Review: How to Get ‘The Ciminelli Glow’

Susan Ciminelli is famously known for the amazing way one’s skin glow when leaving her holistic Spa & Salon.  A staple destination stop in the Bergdorf Goodman penthouse for 10 years, recently moved to an exclusive location on 56th Street.

Still offering her harolded Seawed and Marine lotion along with a variety of holistic nourishment and healing treatments including her Broad Ban Light Rejuvenating Treatment, Aromatherapy Facials, and Nutritional Consultations (for a full list of treatments offered visit susanciminelli.com/spa).

They call it “The Susan Ciminelli Glow,”  for a reason. After a treatment at the spa or a strict Susan Ciminelli regimen (especially if the Sensitive Skin Formula + Marine Lotion are involved), your skin simply radiates like nothing you’ve ever experienced. At least that’s what it was like for me. Starting with a spa treatment was the best way to start this routine, since my esthetician, Lali helped pick the perfect products for my skin and take me through what would be routine. (Lali is also the eyebrow queen if you’re looking to fix your shape). 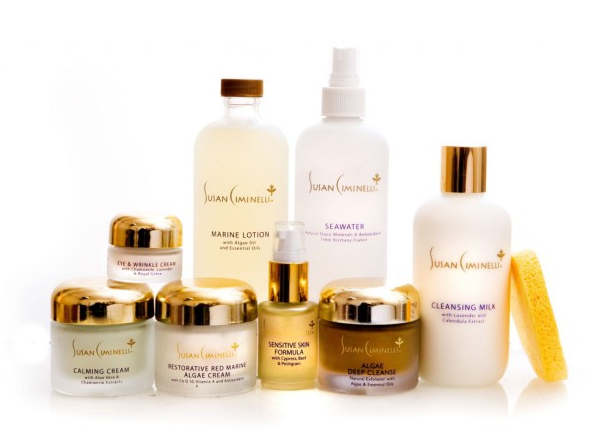 This aromatherapy milk cleanser, gently removes the day’s impurities and make-up without leaving behind any residue, just clean and pampered skin.  Although if you wear a lot of makeup add in a quick remover, otherwise it’s a great way to start your morning. Super gentle and smells like lavendar.

Using one of earth’s greatest resource for nutrients, this deep pore cleanser uses the anti-aging power of the sea to cleanse and purify skin leaving a healthy glow. While it does gently exfoliate as well it’s void of any harsh scrubbers and has almost a menthol feeling to it.

This scrub is the best! It may even be my #1 in the collection. Invigorating and gentle on skin, this powerful scrub helps minimizes the appearance pores by getting deep into skin and clearing out dirt and bacteria thats hard to reach, leaving skin fresh and smooth.  The bamboo scrub is interchangeable with the Algae Deep Cleanse as a weekly exfoliant. If you like to feel like you’re really scrubbing out those pores, this is the scrub for you! You’re skin feels amazing after using it.

The next 3 products (this one the Seawater and Marine Lotion) go in a 1-2-3 order on top of each other while your skin is wet from the last and what deliver “The Ciminelli Glow.” After these three together you look like you left the spa.

The Sensitive Skin Formula fight the effects of harsh weather conditions, using the same oils used by the Ancient Egyptians to protect and strengthen their skin, this unique blend strengthens capillary walls, reducing and avoiding redness.

This mineral mist spray is a natural antiseptic and astringent with trace minerals and elements that absorb quickly and easily into the skin. It’s also refreshing to spray during the day for some extra hydration.

Martha Stewart recently named it as her must-have in The New York Times and it’s easy to understand why. This potent, anti-aging, skin nourishing elixir is as close to a miracle as you can get. It hydrates, nourishes, reduces cellulite and helps prevent wrinkles, fine lines and stretch marks.

This sea clay and seawater extract mask brings detoxifying power of the ocean to your skin.  Drawing out toxins trapped in the skin, the mask heals, helps prevent break outs, calms irritated skin, and all while infusing skin with healthy anti-oxidants. It’s a little firm so you can spray it with the Seawater and use once a week.

This cream contains miracle anti-aging ingredient Matrixyl 3000 which has been known to stimulate collagen production.  Studies have shown amazing results such as a 44.9% reduction of deep wrinkles, 16.6% lifting effects, and a 14.4% reduction of roughness within 2 months of daily use.  It’s definitely a heavier cream then I’m used to but great for retaining moisture during harsh winter months.

I confess when the Day Cream is too heavy for me, I skip straight to the SPF. It’s the perfect face product for me. Containing an expected combinations of ingredients such as Japanese Green Tea and Ginko Biloba, this unique sunscreen offers the power of protection of SPF 30 in a luxurious moisturizer.  Effective on it’s own or layered with any other moisturizing lotion.

Growing up in Buffalo, New York where harsh weather conditions and, what she later discovered, lifestyle and wrong diet can wreak havoc on skin. Susan started at a young age to read up on and look into healthy living, books and healing.  At the young age of 14,  she was diagnosed with an ulcer and frequently found herself getting rashes and break outs.  A year later she went to Italy to live with relatives where she discovered her calling and continued on her mission of healthy living for healthy skin.  There, she found that people cooked with and ate fresh ingredients, learned about energy meridians in the body and other Eastern and alternative medicine concepts from a relative who practiced acupuncture.  With the knowledge she was gaining, she began to combine Eastern and Western skincare philosophies while continuing her travels through Europe picking up on spa treatments such as thalassotherapy (seaweed treatments).   Susan went on to travel to Egypt where she learned about unique essential oils which she eventually incorporated in her own line.  Moving back to the states, to New York City, Susan landed a job at a cosmetics counter at Bloomingdale’s where she advised women on skincare and good nutrition, acquiring quite a following.  She began a spa out of her own apartment, moving to larger and larger spaces over the years until she found herself in the penthouse space of Bergdorf Goodman in 1996; where she stayed for 10 years until she eventually moved to her space today on 56th Street.

{Disclaimer: I got a sample}