Every year, I look forward to visiting DC for the annual White House Correspondent’s Dinner (WHCD). Nicknamed ‘nerd prom’ it’s that special time of year, when celebrities take over Washington and the President gets to debut his stand up comedy routine poking fun at everything from the press, his Republican opponents, the popularity of Michelle’s bangs to, of course, himself. Hosted by Conan O’Brien at the Washington Hilton, it’s arguably DC’s social event of the year. Or for some, an excuse to wear a gown and mingle with your favorite celebrities. Spotted on the red carpet…

END_OF_DOCUMENT_TOKEN_TO_BE_REPLACED

A full Hollywood showing for the White House Correspondents’ Dinner

I find it extremely entertaining that I can completely burn out on the NYC event scene, and yet have the time of my life participating if it’s in a different city… Maybe it’s time to move or just that the weekend of The White House Correspondents Dinner (WHCD) DC is just that fun. (I’m going with the latter).

First off, the fact that the WHCD is referred to as nerd prom is kind of hilarious — which would only be outdone if it actually involved more cuberbunds, awkward glasses and the most outlandish frizzy hair possible; while in actuality it’s a very formal affair with the crowd dressed to the nines and more celebrities in one evening then all of fashion week combined.

The only people not expected to be on their best behavior is our President and host, Jimmy Kimmel who take the stage as though it’s an episode of Comedy Central’s Roast — and maybe Woody Harrelson as the representative of the stoner community. 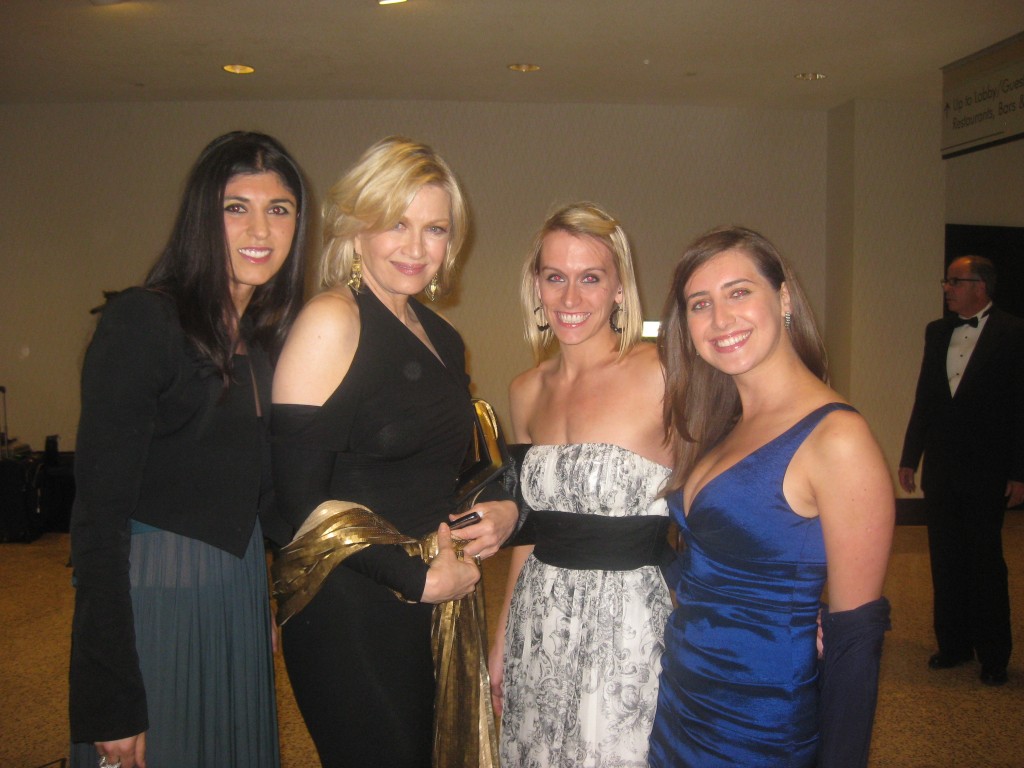 The event takes place at the Washington Hilton and right before the dinner the pre-cocktail events begin in the hotel. Amy and I hit up the CBS/National Journal/Atlantic party which was pact! We had a few glasses of wine, took pictures in the photobooth and mingled with the crowd.

{The most hilarious picture of Claire Danes and Bob Schaffer} 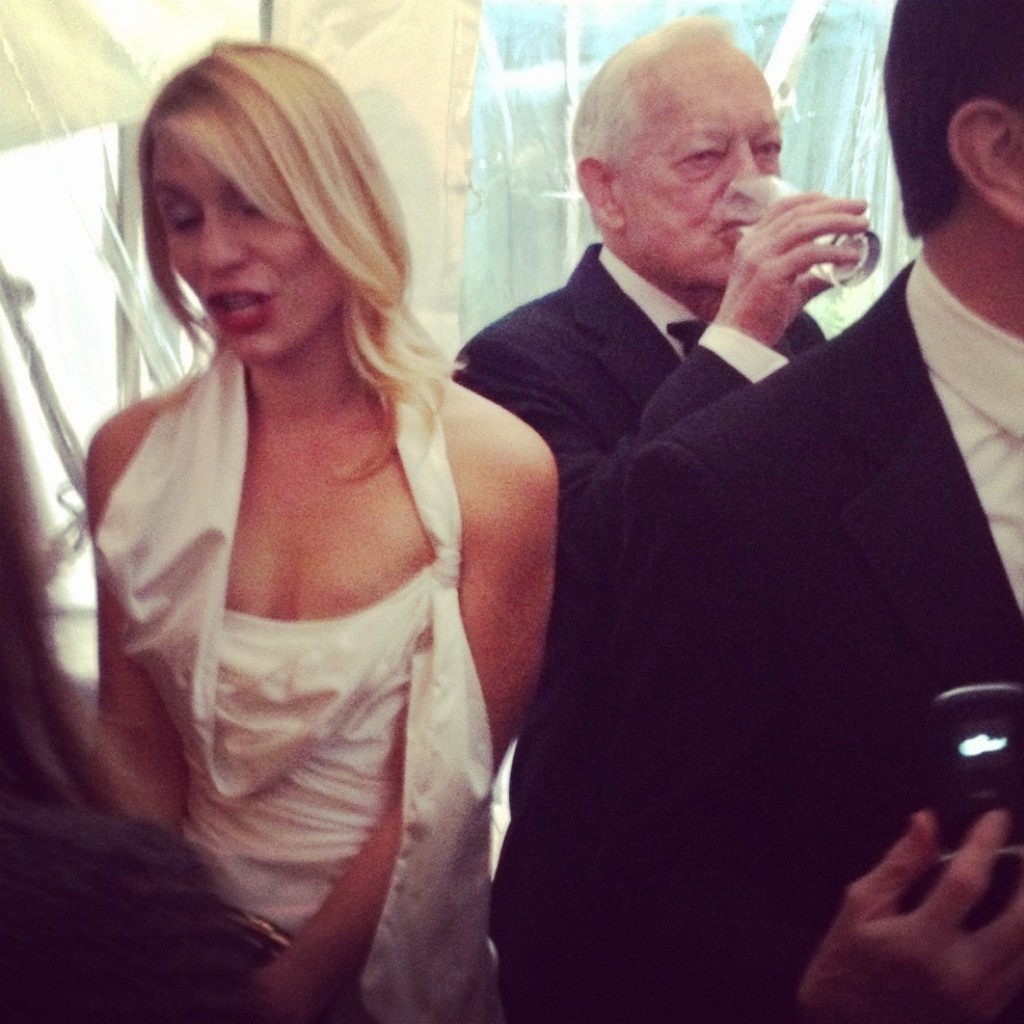 I saw Lindsay Lohan’s head pop through the crowd, but all eyes we’re on Claire Danes, who was standing next to Bob Schaffer! As I made my way over, he moved out of the way, so humble trying to not block the way; only to be surprised that he was the one I was gunning for! It didn’t seem appropriate to say, I’ve been watching you since I was a child, so I went with, “I’ve been watching you forever” — to which he replied, “I’ve been on forever”.  All I needed was Charles Osgood and my evening would be complete.

{Me and Bob Schaffer!} 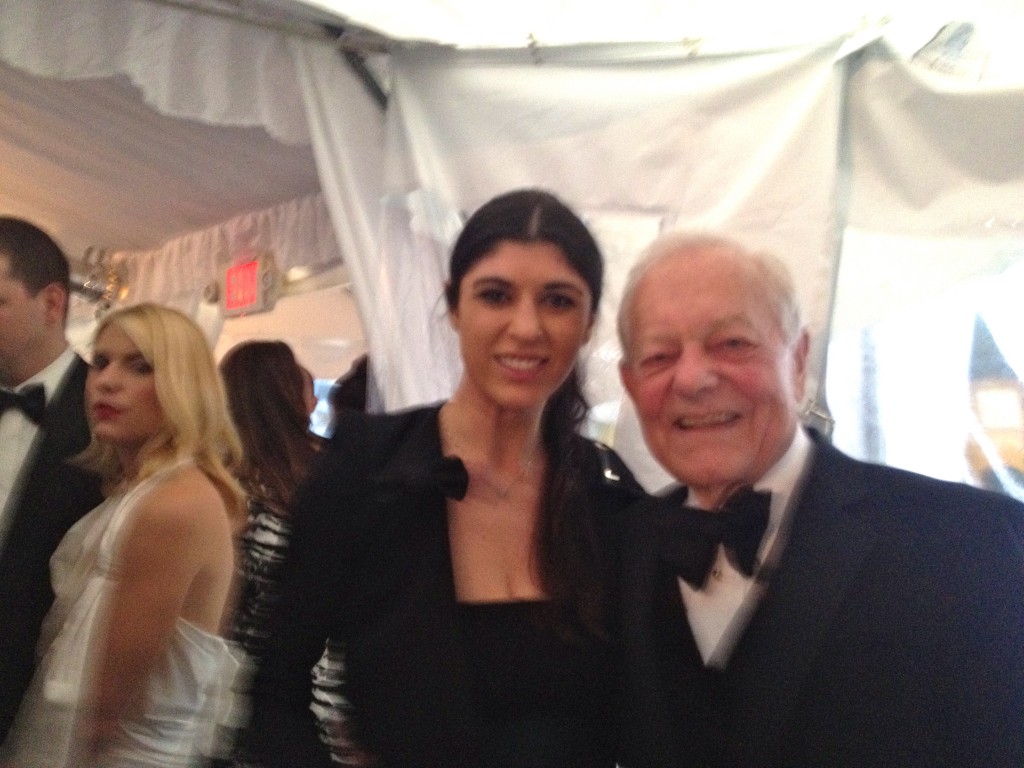 Rosario Dawson, Mary J. Blige and Gayle King formed a nice corner and mingled amongst themselves and fans. Rosario Dawson, who is STUNNING (how is she not a spokeswoman for a beauty brand? Her skin is amazing!) and I bonded over Burning Man.

{Mary J. Blige could not have been sweeter} 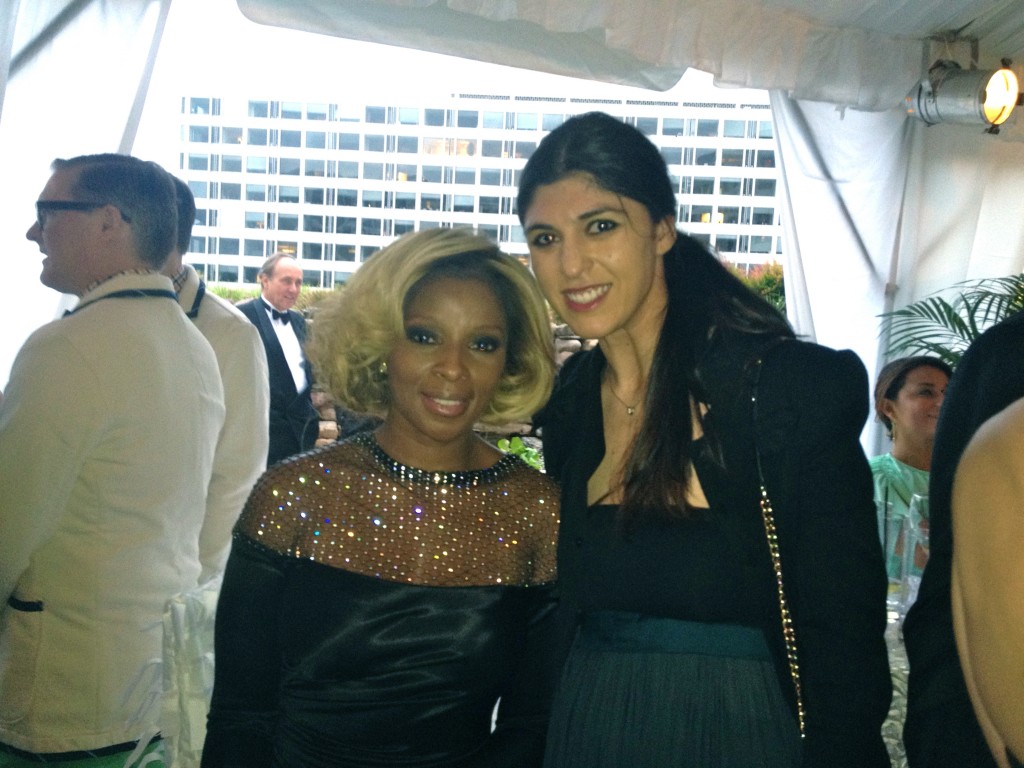 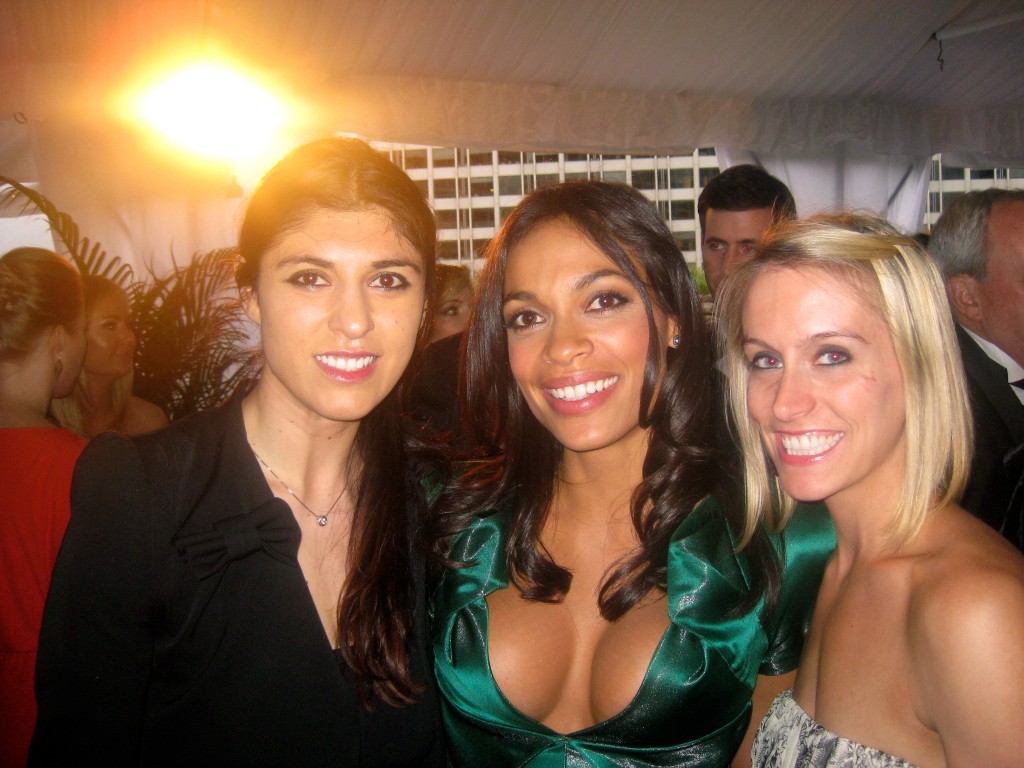 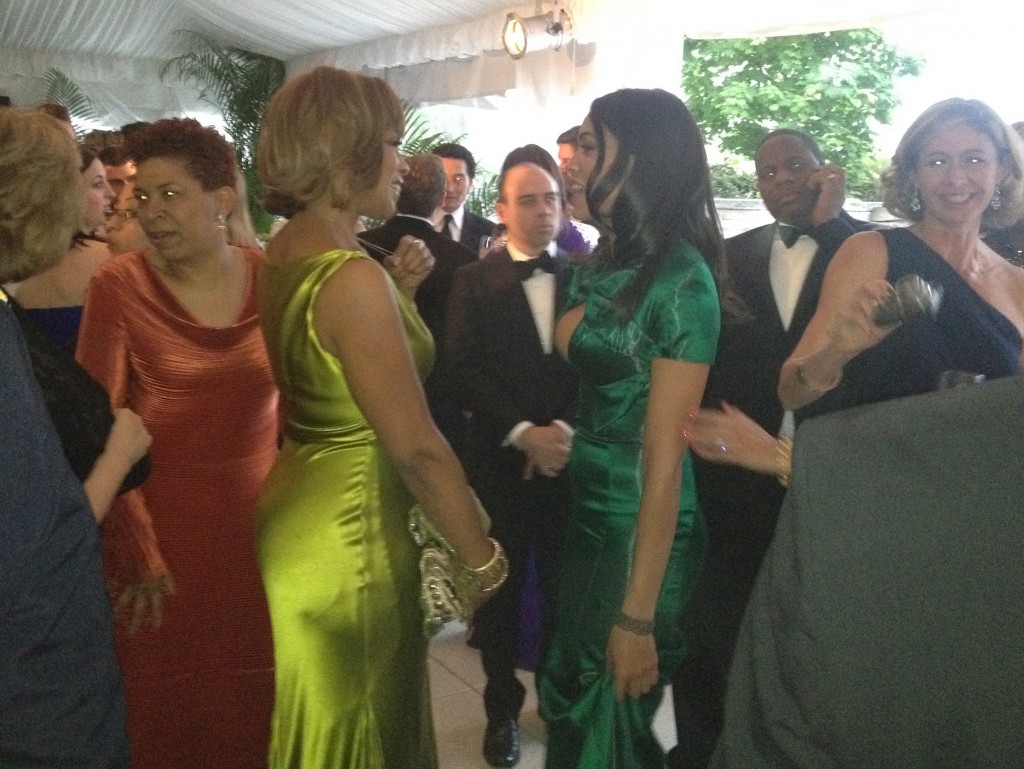 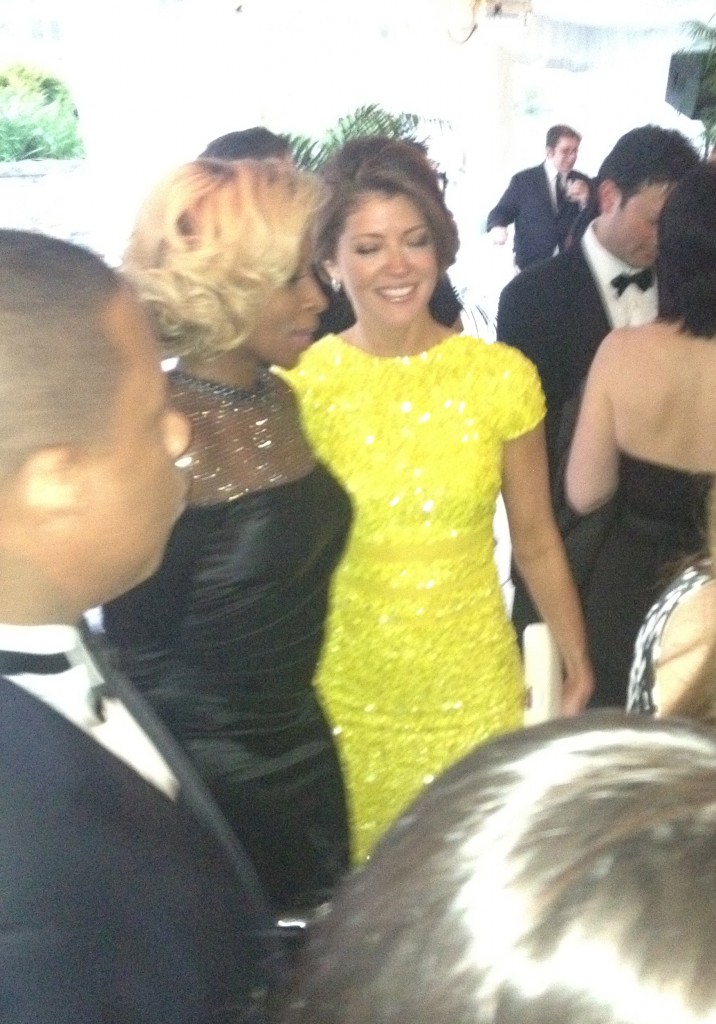 The cocktail party concluded and the dinner guests filed downstairs, while the rest of us formed a viewing party and had dinner upstairs in the hotel. It’s funny to eat dinner and watch Obama speak knowing he’s directly one floor below. Then once the dinner concludes we all regroup in the lobby, which is an even larger red carpet scene then the actual parties! 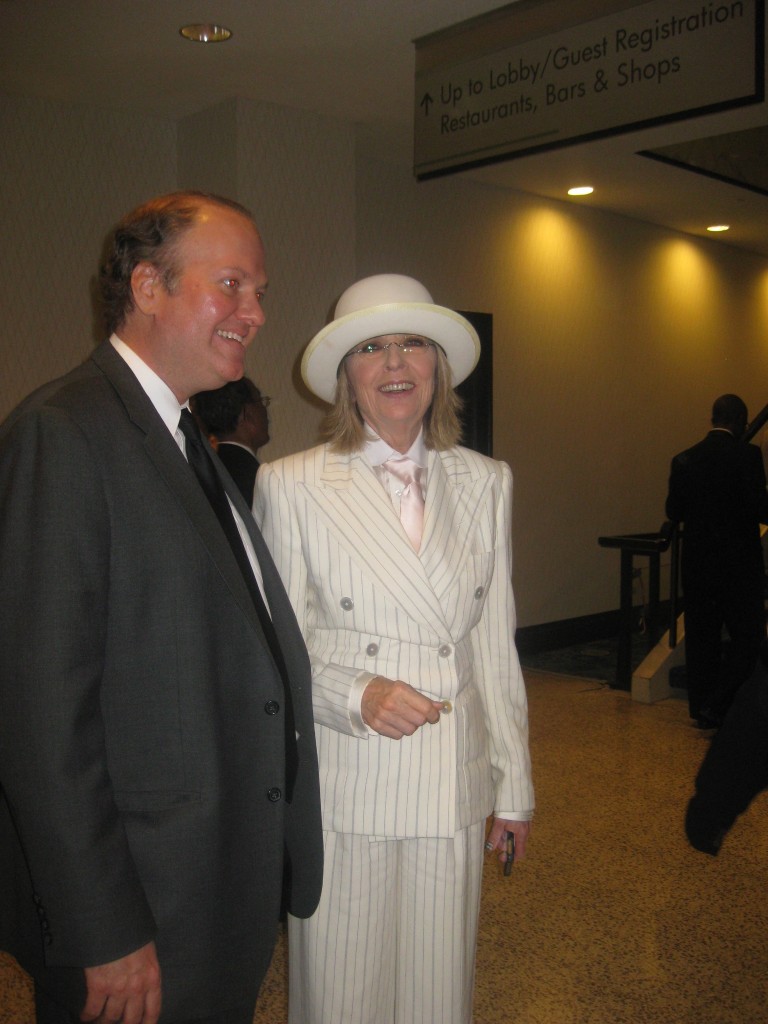 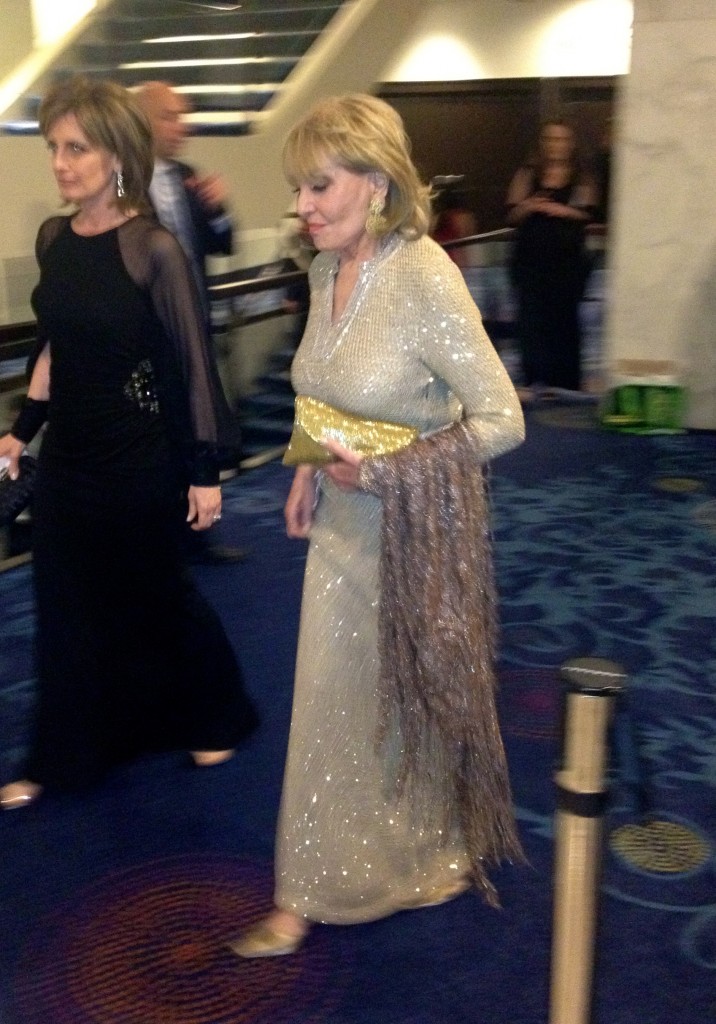 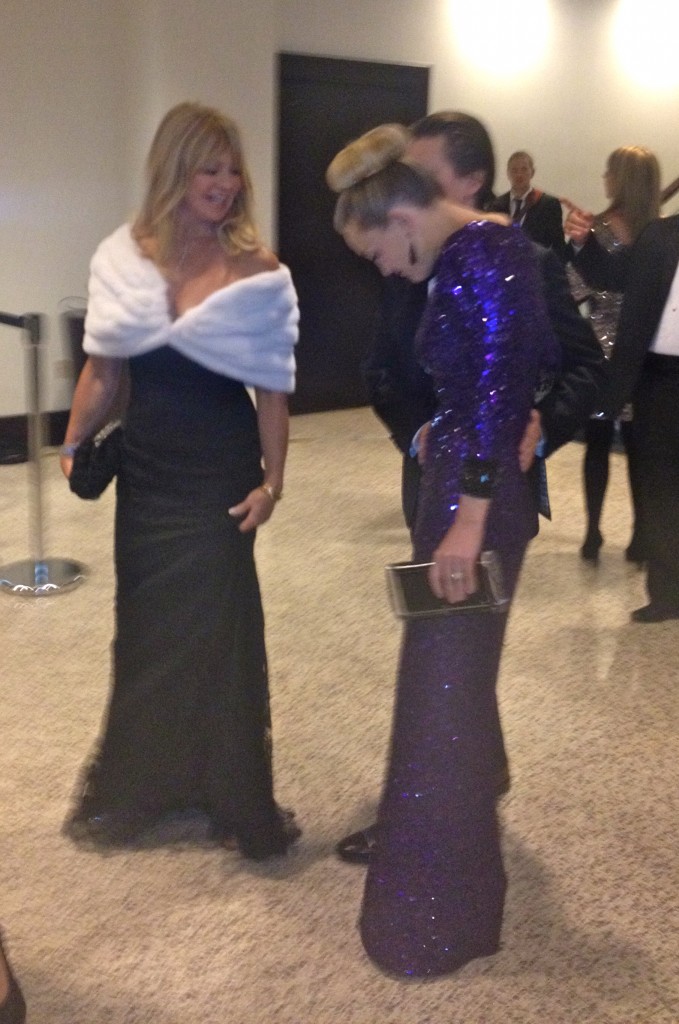 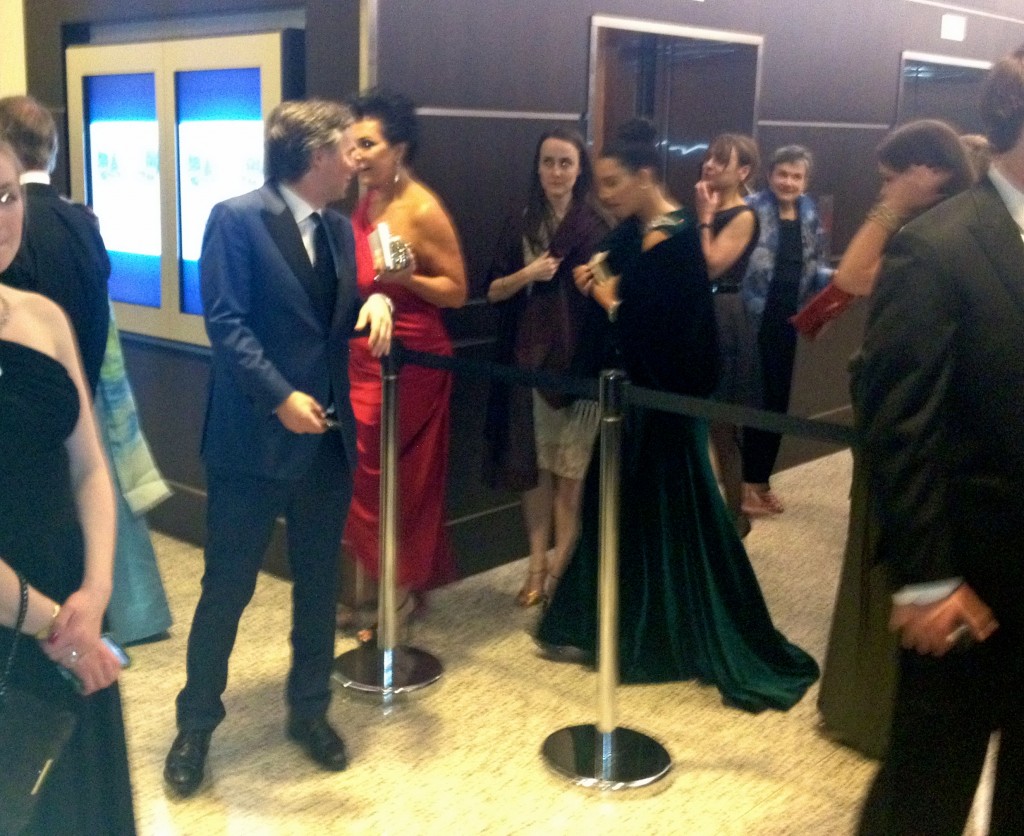 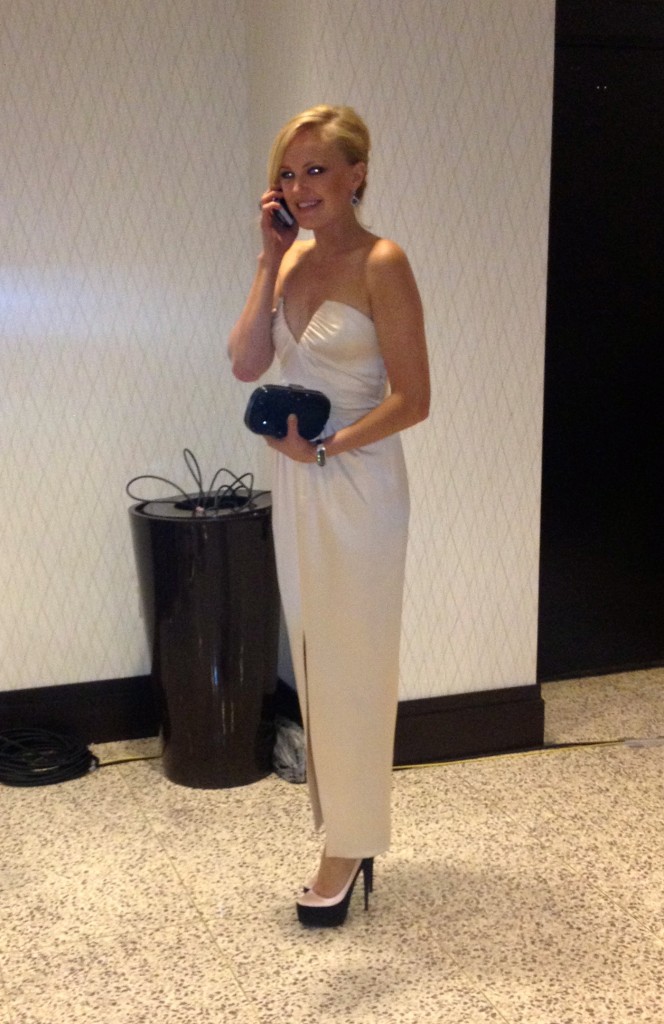 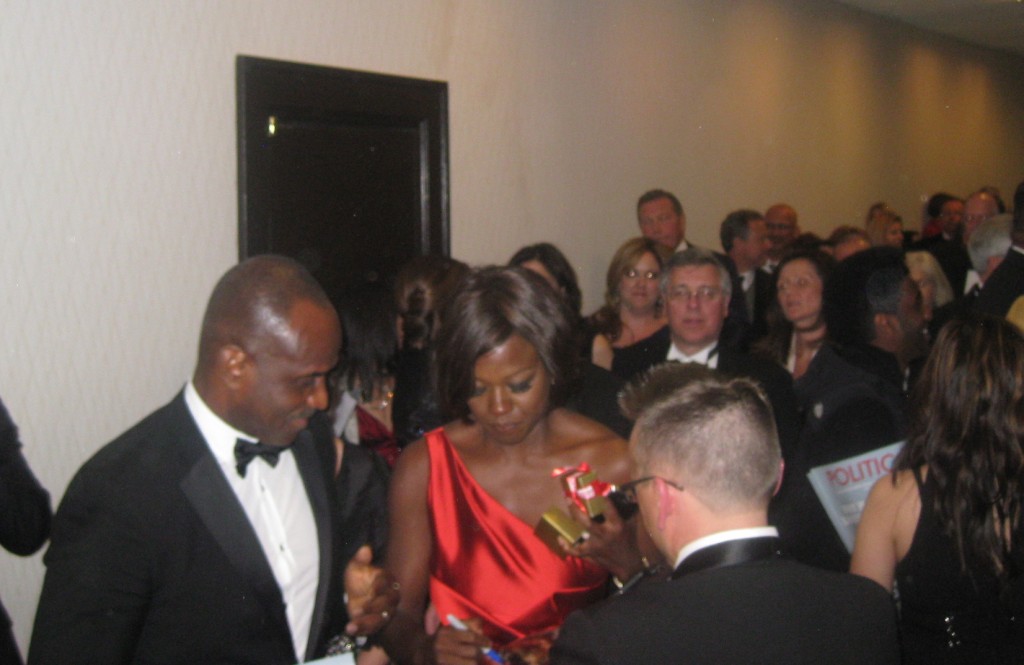 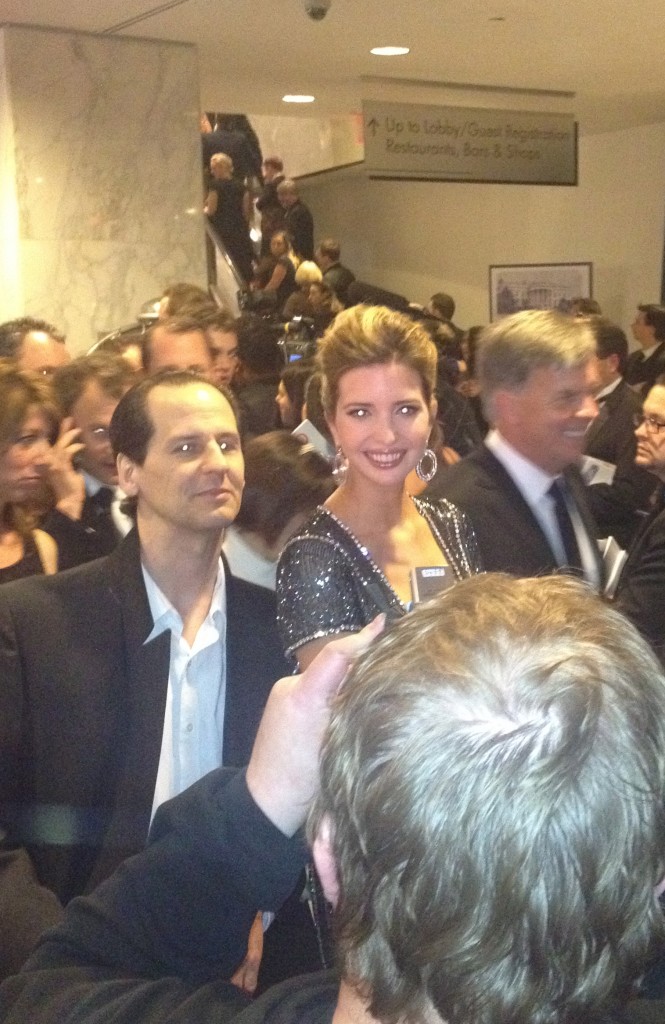 {I never thought Newt Gingrich would make my blog…} 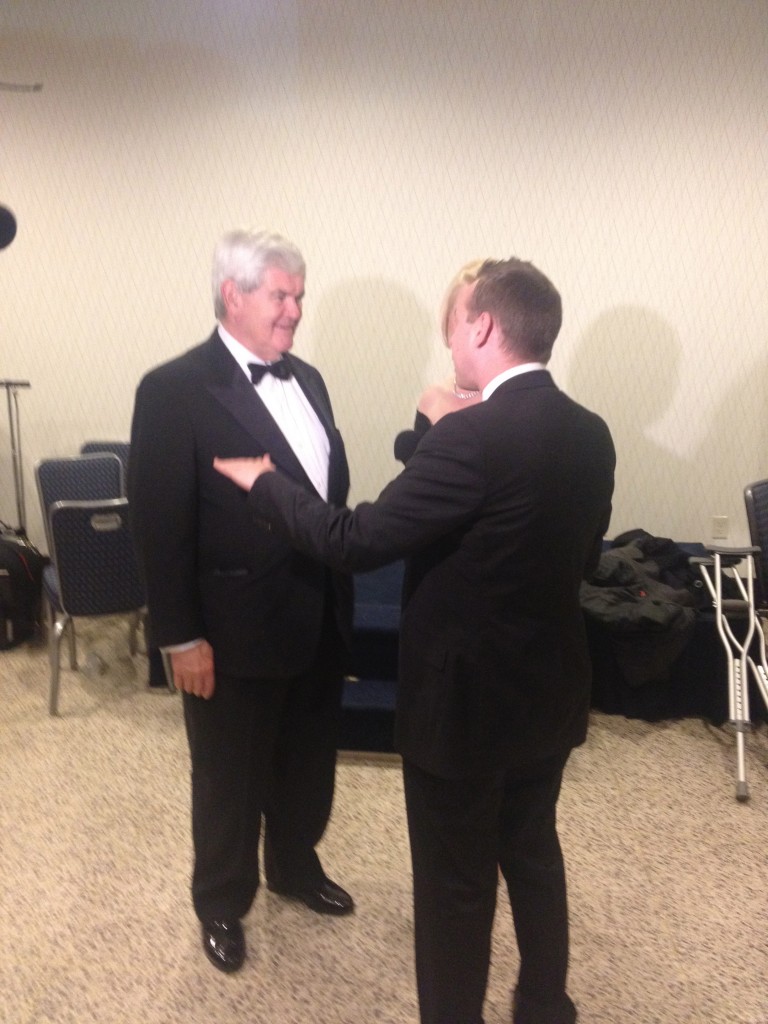 {My lovely date Amy is wearing BCBG, and I’m in a one-of-a-kind hand made Daniel Feld (head designer for Kymerah), and Betsey Johnson jacket (pictured above)} 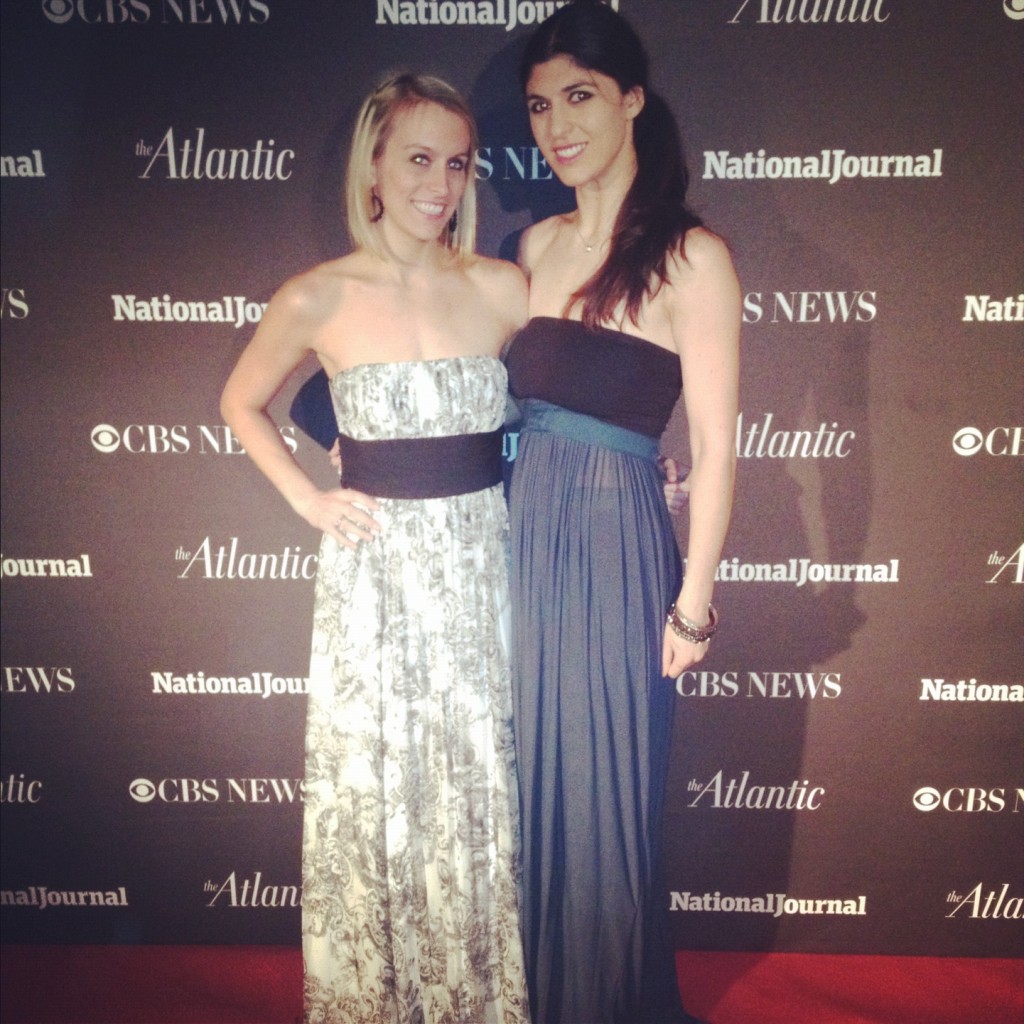 Eventually, I’ll update the Pretty Connected Facebook page with the whole album, so check back for more photos from the evening…