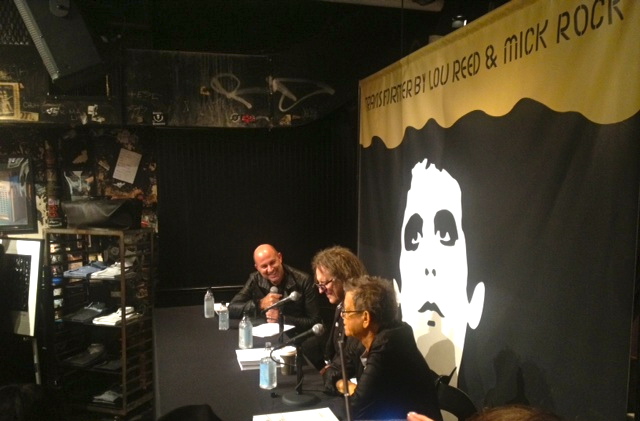 Now this is one for the books! On Thursday, I stopped by the John Varvatos store for the launch of rock legends, Lou Reed and Mick Rock’s new photography book, TRANSFORMER. Moderated by John Varvatos himself, he took to the stage with Lou Reed and Mick Rock asking questions about rock, the 70s and their journey together through this age of music and the images captured in the book.

Charting the transformations of Lou Reed from 1972 to 1980, TRANSFORMER presents never-before-seen imagery of Lou Reed by photographer Mick Rock. Their new book captures Lou in the studio, performing onstage, in his hotel room, and with friends including David Bowie, Nico, Mick Jagger, Iggy Pop and Andy Warhol.

“I’m happy our relationship has weathered the outrageous antics of the past 40 years, enabling us to come together to produce such a beautiful tome.” – Mick Rock

“I like Mick and I like what he photographs, so shooting with him was never a problem. All these moments would be gone for ever if it wasn’t for him.” – Lou Reed
“Lou and Mick’s new book takes us on an amazing journey that has had a significant and lasting impact on music and fashion for over 40 years.  True pioneers and re-inventors, I am excited to host them for their launch of this incredible, sexy, delicious, outrageous, inspiring, rebellious book from our friends at  Genesis Publications.” – John Varvatos 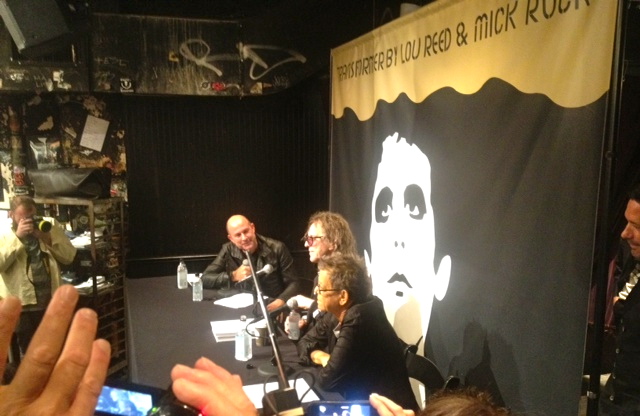 Lou and Mick discuss the photographs and their friendship in a completely original, no-holds-barred dialogue. Lou Reed tells the truth behind the sartorial gestures, innovative stage set-ups, subversive acts and legendary albums that made him one of the most intriguing artists in modern music.
Their collaboration will be showcased in a 11.5″ x 15.5″ large format volume, traditionally craftsman-bound by hand. Lou and Mick’s Transformer image is recreated on the cover, with a variety of foil detailing and gilt page edging. The book is presented in a slipcase and will include an exclusive 7” picture disc of the Lou Reed classics ‘Walk On The Wild Side’ and ‘Coney Island Baby’.
Lou’s originality and creativity has inspired one of the most visually exciting volumes that Genesis has ever made. Each of the 2,000 numbered copies in the limited edition has been signed by both Mick Rock and Lou Reed. 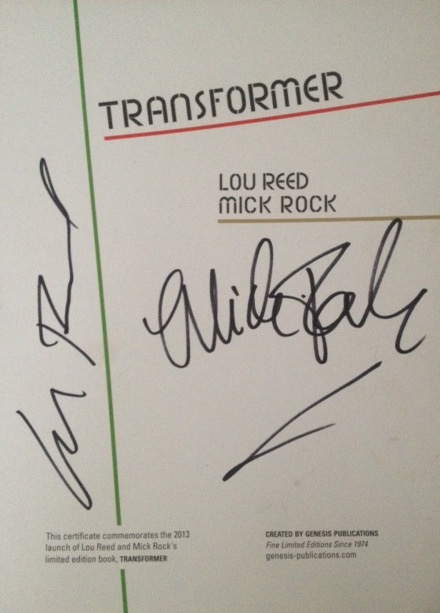 It was truly an honor being in a room with these legends and having the opportunity to hear them speak (and get an autographed certificate!). To learn more about the book and purchase your copy, visit www.transformerbook.com