Home Events I got a HOO HOO HOO this Christmas

On the Eve of Christmas, I got a little surprise.  Instead of a ho, ho, ho down the chimney, we had a hoo, hoo, hoo.  That’s right readers, it was an owl! 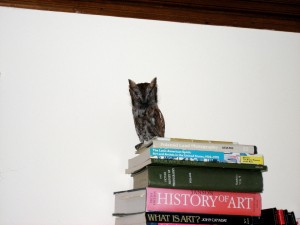 After some moderate freaking out, we called the police and twenty minutes later three policeman and three fireman were in my living room.  They snapped a few pictures with their camera phones, while divulging a plan of attack, and eventually we’re able to guide the little fellow out the window (unharmed).

He was so well behaved and beautiful, just sitting still on the bookshelf until his departure outside.  I wish I could have kept him! No such luck, but I did name him Santa.  What a hoot!